While welcoming the its new addition, Sandy Hook Pilots retired its predecessor, also named New York, which has been a familiar sight in the Port of New York and New Jersey harbor for nearly 50 years.

On February 3, the new P/B New York sailed to its new home, the Sandy Hook Pilot base in Staten Island, NY, situated alongside its predecessor, the old P/B New York.

Sandy Hook Pilots searched for years for a vessel to replace the aging P/B New York, when it came upon OSRV Maine Responder, made available by Marine Spill Response Corporation. A full study of the OSRV ensued, with surveys of the entire vessel including sea trials of a sister vessel on pilot station to compare seakeeping and ship handling capabilities to the present station boats.

The now-retired P/B New York was built in 1972 and designed by M. Rosenblatt & Sons. It served multiple roles and many pilots active and retired spent countless hours aboard training as apprentices. Over the last 50 years, the vessel assumed roles during some of the worst days in the history of this country, including the September 11 terrorist attacks in 2001. During this time, for two weeks P/B New York served as the main Command Center for public agencies such as the US Coast Guard, the New York Police Department, the Fire Department of New York, the FBI and first responders.

“The retired ‘New York’ was part of the Sandy Hook Pilots family for nearly five decades. It served us well and helped our members demonstrate our commitment to support the port in every way possible,” said Captain John DeCruz, President, United New York Sandy Hook Pilots Association. “Looking to the future, the new state-of-the-art ‘New York’ reflects how the association will serve the harbor for the next 50 years—with enhanced safety, productivity and efficiency.” 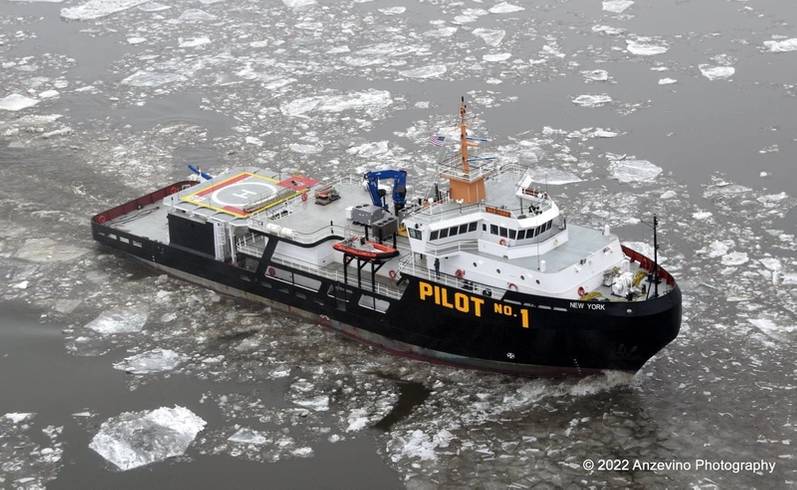 The Future is Now
The new P/B NEW YORK has big berths to fill. The naval architects from JMS Naval Architects, Mystic, CT., were hired to survey the OSRV and assist the Sandy Hook Pilots in the conversion project of the OSRV into a station boat. The completed version includes a new deck house for pilot berthing and facilities with enhancements to the existing house and superstructure.

The conversion project was conducted in three phases. Phase one took place at Caddell Drydock and Ship Repair of Staten Island, NY. It consisted of a hull inspection, dropped rudders, shaft inspection and a complete modification of the stern, readjustment of mast and observation tower and developing of anchor pockets. There was also an initial inspection and project approvals made by the American Bureau of Shipping and the Coast Guard.

The final two phases were completed at Feeney’s Enterprises situated in Kingston, NY. Two main projects that Feeney’s had to complete before seasonal weather changes were the tear outs of the vessel’s oil/water recovery system on deck and in the holds. New potable water tanks were fabricated to allow the vessel to keep stationed up to six weeks before returning for fuel and water. One major addition was the construction of a two-deck house that sleeps up to 28 pilots, with a pilot’s lounge and mess hall. The bridge wings were extended to give a clear view of the pilot launch landing area on each side of the vessel with CCTV camera system installed throughout the vessel’s interior and exterior spaces.

Since the introduction of the new P/B New York in early February, the entire crew of apprentice pilots and permanent Union crew (International Organization of Masters, Mates and Pilots, ILA, AFL-CIO-AMG Division) have been familiarizing themselves with the vessel and participating in training conducted by Maritime Pilots Institute (MPI) of Covington, LA.