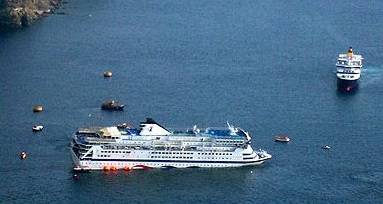 Multiple news sources have reported that Greek court has convicted nine officers and shipping company officials of negligence in the sinking of a cruise ship off the resort island of Santorini more than six years ago.

Sea Diamond, a Louis Hellenic cruise vessel, was carrying roughly 1,600 people when it hit rocks off Santorini’s cliffs and sank in April 2007. Two French passengers were never found and are presumed drowned.

The Piraeus court imposed suspended sentences Wednesday ranging from six months to just over 12 years, and acquitted another four defendants, the Associated Press reported. The court imposed the strictest sentence, 12 years and two months, on the ship’s captain for causing an accident, negligence that led to manslaughter and marine pollution.