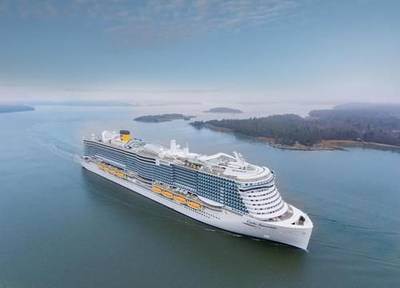 A test carried out on Thursday on a passenger from Macau aboard a cruise ship in Italy proved she did not have the new coronavirus, an Italian health ministry spokesman said.

The Costa Crociere company’s ship Costa Smeralda docked in Civitavecchia, north of Rome, with about 6,000 people aboard. The mayor of the town had asked authorities to prevent passengers from disembarking until it had been confirmed the virus was not present.

The 54-year-old woman, who boarded the ship on January 25 in the port of Savona, had come down with a fever and flu-like symptoms. Both she and her partner were placed in an isolation unit on the ship, Costa Crociere said in a statement.

The Costa Smeralda had visited Marseilles in France and the Spanish ports of Barcelona and Palma de Mallorca this week before docking on Thursday at Civitavecchia.

Samples were taken to Rome’s Spallanzani institute, a center specializing in infectious diseases and viruses that confirmed there was no infection, the health ministry added.

On Thursday, the World Health Organization declared that the coronavirus epidemic in China now constitutes a public health emergency of international concern.

Countries have begun isolating hundreds of citizens evacuated from the locked down Chinese city of Wuhan to stop the spread of the coronavirus, which has killed 170 people.

The passengers on board the Italian cruise ship reacted in different ways to the potential virus danger.

“There is no tension, they (my relatives) have eaten, everything works, they should have been able to leave the ship but they cannot,” Adriano Pavan, the father of a passenger on board with two children, told Reuters.

Carla Configoni, the mother of a pregnant woman on board, said she had spoken to her daughter who was “very agitated”.

“She was fine until late morning because she didn’t know what was going on. Then, they heard the news,” she said.

In the light of the emergency MSC Crociere, another European cruise company, said in a statement that anyone who had visited mainland China in the past 30 days would be denied access to its ships.

TUI is planning a share sale to raise up to 1 billion euros ($1.2 billion), as the world's largest holiday company looks to ride out the coronavirus-l