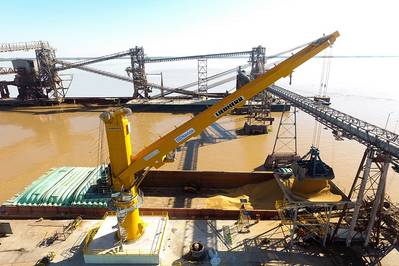 Uruguayan company Corporación Navios replaced a Liebherr long duty cycle crane with a permanently installed harbor crane type FCC 300. The recently erected harbor crane will be used for dry bulk handling of barges in hoppers at the terminal in Nueva Palmira, Uruguay. The now total of three harbor cranes is expected to increase the terminal's handling rates and generate operating synergies, as the crane operators will work with the same type of crane on all operations.

Corporación Navios has been working with Liebherr cranes for 30 years. The Liebherr products are used to handle bulk cargo on the narrow pier. For terminals with little space but a high workload, the space-saving design of the Fixed Cargo Cranes series by Liebherr is the perfect solution. This has been demonstrated over the past six years: Between 600 and 700 tonnes of iron were handled per hour throughout this time. They were supported by a Liebherr HS 871 HD long duty cycle crane, which is now being replaced by a FCC 300, the third of its kind at the terminal. With over 100,000 operating hours, the long duty cycle crane is a symbol for the successful and reliable cooperation between Corporación Navios and Liebherr. In the course of this, the customer's renewed decision in favor of a Liebherr maritime crane is a sign of trust.

"With the investment in another FCC 300, we are taking a decisive step towards higher turnover rates," said Rosina Lurato, Project and Certification Manager of Corporación Navios, "We handle around five million tonnes of dry cargo per year and need fast as well as reliable equipment. Based on our positive experience with the two permanently installed cargo cranes, it was quickly clear to us that another crane of the same type was the right choice."

About half of the five million tonnes are exported from Uruguay, the other half is imported dry cargo from other countries. The FCCs handle various grains such as soy, maize and wheat, as well as minerals such as iron and manganese. The new FCC 300 is mainly used for soy handling and can handle up to 1,000 tonnes of soy per hour. The soy from Paraguay, Bolivia and Brazil is loaded onto overseas ships at the terminal and transported to Europe, Africa and the Far East.

In addition, to the space-saving design, the higher handling capacity was also a decisive feature for choosing the third permanently installed harbor crane. Furthermore, the higher flexibility due to the interchangeability of the grabs played an important role. With the two FCCs already in place, the crane operators now always work with the same type of equipment. This increases safety during operations and facilitates routine operation. Another advantage of the identical cranes is a more efficient maintenance and procurement of spare parts. All three units can be maintained in one service loop. Also, the Liebherr engineers from Argentina can train and specialize the customer's maintenance personnel on the FCC 300. This enables them to check certain aspects of the crane’s everyday operations independently. In case of urgent service needs by the customer, the Liebherr specialists can be on-site in just two hours.

Marshall Takes the Helm as CEO of Ecochlor