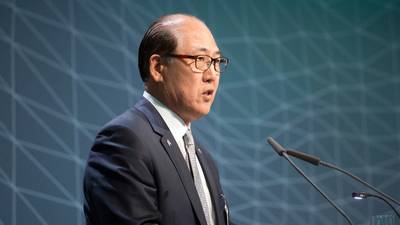 International Maritime Organization (IMO) Secretary-General Kitack Lim issued a statement refuting a report recently published by U.K.-based InfluenceMap that accuses shipping industry organizations of lobbying to obstruct environmental regulations at the IMO.
“Recent media reports have questioned the transparent, inclusive approach adopted by all stakeholders with an interest in addressing the threat of climate change through the IMO, the global regulator of shipping, and the body most able to deliver uniform, global solutions in the spirit of the 2015 Paris Agreement. Indeed, IMO's efforts to reduce harmful air emissions from ships spans decades, and continues this week with the second meeting of the Intersessional Working Group on Reduction of GHG Emissions from Ships. 57 IMO Member States and 21 Non-governmental organizations (NGOs) in consultative status are participating in this week's meeting.
“As is the case in other UN agencies of a technical nature, the make-up of national delegations to IMO is entirely a matter for the countries themselves, and those countries who wish to include industry technical experts or others may do so. Neither the IMO Convention, nor any of the Rules of Procedure for individual meetings limits, in any way, Member States' ability to structure their delegations as they consider most appropriate in order to carefully consider the issues before them.
“In addition, IMO currently has consultative arrangements with 77 NGOs. They include environmental groups, seafarer organizations, and groups representing classification societies, shipbuilders and owners of different types of ships. The range of NGOs represented at IMO rightfully covers the broad spectrum of shipping, maritime and social interests. These NGO's are selected by the Member States based on their ability to substantially contribute to the work of the IMO through the provision of information, expert advice and representation of large groups whose activities have a direct bearing on the work of IMO. Participation of organizations representing so many different viewpoints provides a balance that adds considerably to the credibility of the Organization's overall output. This inclusiveness is one of IMO's great strengths.
“I look forward to the continued efforts of all involved to address the pressing issue of climate change.”
Kitack Lim (Republic of Korea) is the eighth elected Secretary-General of the International Maritime Organization. He was elected Secretary-General of the Organization by the 114th session of the IMO Council in June 2015 for a four-year period beginning January 1, 2016. The election was endorsed by the IMO's Assembly at its 29th session in November 2015.