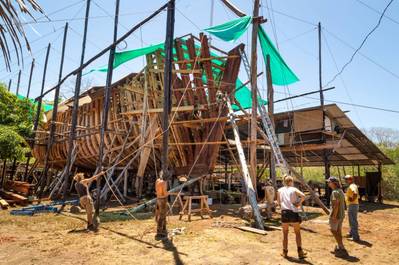 Some 200 workers from 27 nations are building a hybrid sailboat on the Pacific coast of Costa Rica designed to carry 350 tons of goods, hoping to demonstrate that in the 21st century it is possible to transport cargo without polluting the environment.

Inspired by the historic Finnish trading schooner Ingrid of the Aland Islands, the firm Sailcargo Inc says it designed the vessel named Ceiba “to be the first of its kind in the world.” It will rely mostly on wind power with two auxiliary electric engines for maneuvering in ports and low winds.

“One of the most important things is to prove that it’s financially profitable” as well as be environmentally and socially sustainable, Sailcargo’s chief executive and founder Danielle Doggett told Reuters.

Doggett, a professional ship captain, founded the company with her partner Lynx Guimond, an adventurer and cabinetmaker. The Canadian couple along with a Costa Rican partner intend to finish the prototype in 2021. The Ceiba is named after the sacred tree of the Central American native peoples.

Ceiba will be put into operation in 2022 on routes between Canada, Ecuador and Hawaii, and the firm plans to recover over six years the private investment of $4.2 million needed for the project.

“We want it to be a flagship ship that carries the Costa Rican flag with products that can be truly sold under the seal of ‘zero emissions’ like coffee, turmeric, salmon, barley and others,” said John Porras, co-founder and legal representative of Sailcargo.

Amid the incessant sound of saws, sanders and mallets, the 45-meter-long (148-foot-long) Ceiba is being built using wood from secondary forests, cultivated or from fallen trees nearby.