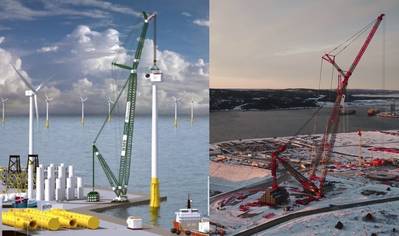 "The investigation concerns the recently announced series of land cranes, including a 3000-ton ring crane, by Huisman and BMS. If any violations are apparent, Mammoet will take steps to actively enforce its legal rights in any and all applicable jurisdictions," Mammoet said.

"As the global leader in heavy lifting and transport, Mammoet drives innovation in the industry. This includes major developments such as SPMT trailers, hydraulic skid systems, Mega Jack series and containerized (ring) cranes. This innovation is one of the foundations of Mammoet’s business and therefore any violation of its rights, including its intellectual property, will be pursued via legal enforcement," Mammoet said.

The company also shared two photos comparing the Huisman and BMS crane, and the Mammoet SK350 crane (see above).

As reported in January, Denmark-based BMS Heavy Cranes ordered a 3,000mt Ringer Crane, with an option for a second unit from the Dutch crane maker Huisman.

Offshore Engineer reached out to Huisman and BMS, seeking comment on the Mammoet investigation. BMS did not reply.

Huisman sent the following response:"We were surprised to read in the media Mammoet’s allegation regarding an alleged breach of intellectual property. We have not received any details of infringement claims.

Huisman is the inventor of the Modular Ringer Crane. Since the delivery of the first one of its kind 25 years ago we have built up a multi-decade track record of designing and constructing this type of crane.

Huisman has very high standards when it comes to intellectual property in the development of our technically advanced products. This is also the case with the design of the 3,000mt Ringer Crane for our client BMS Heavy Cranes, an entrant in the growing heavy lift market.

As we do with each contract, prior to the signing with BMS Heavy Cranes, we conducted a thorough patent investigation to ensure that there were no infringements. Therefore, we will await the outcome of Mammoet’s investigation with confidence.”

Back in January, when it announced the order from BMS, Huisman said that the 3,000mt Ringer Crane crane setup had been optimized for operations in the wind industry. With the capability to lift components of 1,200mt at heights of up to 225m, and heavy structures of 3000mt at a reduced height, the crane will ready BMS for installation of the next generation of wind turbines on and offshore and on floating foundations, Huisman said last month.

Delivery of the crane is scheduled for the second half of 2023. Financial details were not disclosed.

Description of the crane, as shared by Huisman in January

▪ Modular ring system, allowing for a full 360° ring being used, or a portion of it – depending on specific site layouts