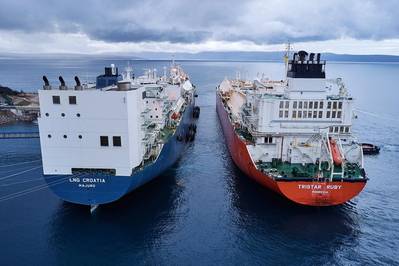 Croatia's liquefied natural gas (LNG) terminal on the northern Adriatic island of Krk began operations on Friday amid the first delivery of gas, said the company which runs the unit.

"LNG tanker Tristar Ruby anchored with 143,000 cubic meters of gas which signifies the beginning of the commercial use of the terminal," LNG Hrvatska director Hrvoje Krhen told the state news agency Hina.

According to the company, the unloading of gas, delivered from the United States, will take place until Jan. 3.

The Krk floating LNG terminal has a capacity of 2.6 billion cubic meters (bcm) of gas annually and all its capacities in the next three years are sold out.

Plans for the LNG terminal on Krk were floated more than two decades ago and initially, the idea was to build a land terminal.

However, due to too much red tape and the opposition of the local community and environmentalists, the implementation of the project suffered many setbacks, and eventually, the current conservative government opted for the floating terminal.

The Krk terminal diversifies supply for Croatia, which has so far relied on Russian gas and its own production, but also for some other countries in central Europe including Hungary.