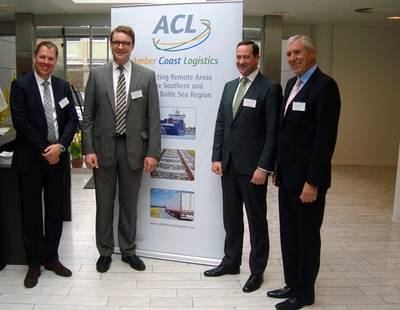 The Amber Coast Logistics project brings together 19 project partners from Belarus, Denmark, Germany, Latvia, Lithuania and Poland, as well as another 25 associated partners. Founded with EU support, the project is designed to strengthen and exploit the existing potential of the transport and logistics sector in the southern and eastern Baltic Sea regions.

'Boundaries in the head are slower to disappear than frontiers between countries.' This was the realization of the recent mid-term event participants of the EU logistics project Amber Coast Logistics (ACL), held in Copenhagen, Denmark.  The potential for growth in the flow of goods between Western Europe and the Baltic Sea region was considered nonetheless to remain high.

Around 60 participants attended the event, organised by the ACL project partners: the Aalborg- based FDT Association of Danish Transport and Logistics Centres, Port of Hamburg Marketing and the Baltic Sea Forum, an international association that promotes economic, political and cultural cooperation between the Baltic seaboard countries.

The event was held with a view to assessing progress at the halfway point of the project. Lectures and discussions between speakers and visitors to the event revolved around the question with which the ACL project has been preoccupied for more than a year and a half: As well as promoting international transport operations, how can the growth of personal networks between Western Europe and the Amber Coast Region, with its neighbouring states like Belarus and the Ukraine, be further encouraged?

A study by the Bremen-based Institute of Shipping Economics and Logistics (ISL) is predicting an increase of between 8.6 million and 9.9 million TEUs, attributable above all to the rapid economic growth of the Baltic hinterland regions.

Apart from practical obstacles in the daily transport of goods – like lengthy customs procedures, and time spent waiting at international border crossings – growth forecasts of this kind are also and above all challenged by existing opinions. This was the unanimous conclusion of those attending the ACL mid-term event.