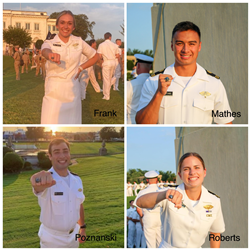 Cadets Breanna Frank, Nathan Mathes, A.J. Poznanski and Erin Roberts were awarded the memorial scholarship based on their interest in pursuing a career at sea, as well as their service during their sea year aboard a Crowley-owned or -managed vessel.

Midshipman First Class Breanna Frank, from Sidney, Mont., is pursuing a bachelor’s degree in maritime logistics and security. Frank is a member of the track and field and cross-country teams, and she participates in the club hockey team at the academy. Frank sailed as a deck cadet onboard the MV Yorktown Express, a Crowley-managed container ship.

Midshipman First Class Erin Roberts from Naperville, Ill., studies marine engineering systems. She has sailed aboard the Crowley-managed container ship MV Charleston Express. At USMMA, Roberts serves as the regimental academic officer, an EMT officer in charge, and a captain of the women’s swimming and diving team.

Since 1984, Crowley has funded more than 1,000 students studying at maritime academies and other select schools in the United States mainland, Puerto Rico and Central America, totaling more than $3 million dollars.

The Thomas B. Crowley Sr. Memorial Scholarship program was established in 1994 by his son and CEO and chairman, Thomas B. Crowley Jr. The memorial scholarship commemorates and honors his father’s instrumental leadership and accomplishments for the company and maritime industry.