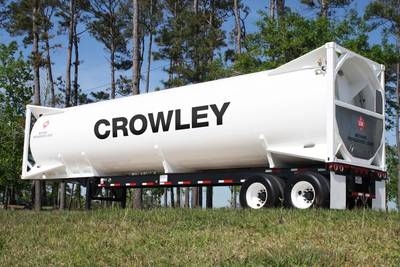 The contract, executed through Crowley’s Carib Energy subsidiary, includes the fuel supply and transportation of LNG to two of the manufacturer’s plants in Cayey and Cidra, Puerto Rico, which will provide both facilities with substantially lowered emissions and an alternative to their current fuel source, diesel. Other benefits include an uninterrupted fuel supply due to the abundance and availability of U.S.-sourced LNG.

Crowley explain that the transportation of LNG from U.S.-based liquefaction facilities to the two manufacturing plants will be managed by Crowley’s domestic logistics team, which will coordinate over-the-road transportation of 40-foot intermodal containers authorized by the Department of Transportation to carry approximately 10,000 gallons of LNG to the company’s Jacksonville, Fla., shipping terminal.

Once in Jacksonville, the containers will be loaded onto company-owned vessels departing for Puerto Rico. Upon arrival on the island, Crowley’s Puerto Rico-based logistics team will deliver the LNG to the local Coca-Cola bottling facilities. There the LNG will be re-gasified back into pipeline natural gas for power consumption.

“From the sourcing and transportation to the delivery into the equipment, the entire process and LNG supply chain will be seamless for Coca-Cola,” explained Crowley’s Greg Buffingon, vice president, Carib Energy. “We are thrilled to play a pivotal role in supplying a cost-efficient, safe, reliable and environmentally friendly natural gas fuel source for their operations.”

Background
Last year, Crowley announced it had entered the LNG market by acquiring Florida-based Carib Energy LLC. Founded in 2011, the Crowley company was the first to receive a small scale, 25-year, LNG export license from the U.S. Department of Energy (DOE) for LNG transportation from the U.S. into Free Trade Agreement (FTA) countries. Shortly thereafter, a Crowley LNG services group was formed to begin offering supply, transportation, and distribution of LNG services via 10,000-gallon ISO tanks.

While Carib Energy has a pending DOE application to supply LNG transportation services into non-FTA countries, its current licensing allows the Crowley company to supply cost-efficient, environmentally friendly LNG from the U.S. to both commercial and industrial customers within the Caribbean and Central and South America – all countries where LNG is an attractive commodity thanks to its low price point in the face of growing power supply costs.

Crowley add that it is also cementing its involvement in future LNG fuel bunkering for ships transiting between the U.S. and Caribbean markets.