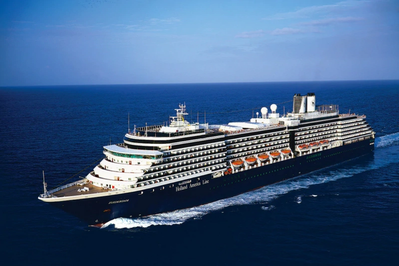 The U.S. government and Florida were working on a plan on Wednesday to allow thousands of cruise ship passengers exposed to an onboard coronavirus outbreak to disembark, a day after President Donald Trump urged the governor to drop his opposition to their docking.

Fort Lauderdale Mayor Dean Trantalis said he was not opposed to them docking in his city. But he said a clear protocol was needed to protect residents of his South Florida city from infection.

“There can be no missteps in this process,” he told CNN.

“We have to be comfortable knowing that they are being quarantined in such a way that they do not infect the rest of the community,” Trantalis said.

One of the two Dutch cruise ships involved is Holland America Line’s MS Zaandam. Nearly two-thirds of its passengers, those who passed a medical screening, were moved to the line’s sister ship, the Rotterdam.

Both vessels were on the way to Port Evergladesin Fort Lauderdale, the Zaandam carrying nearly 1,050 passengers and crew, and the Rotterdam almost 1,450.

Florida has reported 6,490 cases of coronavirus, including 251 non-residents, and 85 deaths, according to the state website. It ranks eighth in the number of new cases reported in the past 24 hours, analyst Michael Newshel of investment bank Evercore ISI said in a research note.

For the country as a whole, the tally stands at more than 190,000 reported cases and nearly 4,000 deaths, a toll that shot up by more than 850 on Tuesday, by far the most for a single day. Nearly half of the new fatalities were in New York state, the epicenter of the pandemic despite closed businesses and deserted streets.

Florida Governor Ron DeSantis issued a stay-at-home order on Monday for four counties in southern Florida that will last until April 15 and then be reviewed. On Tuesday, he said the White House task force had not recommended a statewide order.

“If they do, that’s something that would carry a lot of weight with me,” DeSantis told reporters.

Florida’s Democrats in the U.S. Congress published an open-letter to DeSantis renewing a call for him to issue a statewide stay-at-home order, saying the decision cannot be left to county and municipal governments.

“This pandemic has not respected global borders so it certainly will not respect county borders,” said the letter, which was signed by U.S. Representative Lois Frankel and 12 other members of Congress.

Sick and stuck
Jennifer Allan, whose 75-year-old father and 70-year-old mother are sick and stuck aboard the cruise ship Zaandam, was asked on NBC’s “Today” what she would say if she could speak with DeSantis:

“I would beg him and everybody who has the power to make this happen that we need to look at the humanity of what’s going on right now. There needs to be compassion for these people.

Another Florida official, Broward County Mayor Dale Holness, said the port was being operated by a “unified command” of federal and state agencies discussing the situation.

“As it stands today, they’re going back and forth, working on a plan to ensure that we’re safeguarding the people of Broward County from further spread of this virus, but also seeing how we can find a way to deal with these folks” in a humanitarian manner, Holness said on MSNBC.

New month, new concerns
With rent and mortgage payments due on Wednesday, the first day of the month, job losses soaring, medical equipment in short supply and a projected coronavirus death toll in the United States of up to 240,000 people, Americans steeled themselves for months of uncertainty.

Medical experts on the U.S. government’s coronavirus task force on Tuesday said they were predicting that even with strict observance of stay-at-home orders and other precautions, between 100,000 to 240,000 people could ultimately die from the respiratory disease.

Public health officials are debating whether to recommend that people wear protective face masks even as an emergency stockpile of medical equipment maintained by the U.S. government has nearly run out of protective gear.

U.S. Surgeon General Jerome Adams, interviewed on the NBC News “Today” program on Wednesday, said officials were weighing potential new guidelines given the role of asymptomatic people carrying the virus but that people wearing masks should try not to touch their face and should still save N95 masks for healthcare workers.

“Wearing a face covering does not mean that you don’t have to practice social distancing. The most important thing you can do is stay at home right now,” Adams said.

The start of April brings a moment of reckoning for millions who have lost jobs and are forced to stay at home - their rent and mortgage checks are due.