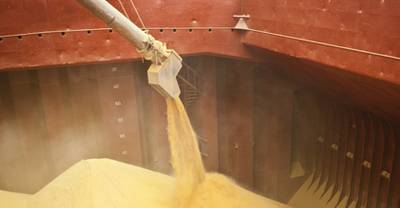 Poor soy crushing margins in China that have led the country to default on soy purchases are short term and should improve in two to three months, Bunge Ltd's chief executive officer said.

CEO Soren Schroder was in Brazil for the inauguration on Friday of Bunge's terminal in Barcarena in Para state on Brazil's northern coast, which cost 700 million reais ($314 million) to build and has a capacity of 4 million tonnes.

"Margins in China are bad for everyone," Schroder said at a dinner late on Thursday. But "it's a short-term problem," he added.

Schroder said the long-term trend is for China's soybean demand to increase, though he did not explain why he sees improvement for Chinese crushers in two or three months.

Chinese importers have canceled at least 500,000 tonnes of soybeans purchased from Brazil and the United States in recent weeks, according to Asian market sources, as buyers struggled to get credit amid losses in processing beans.

Weaker soy demand from China puts one of Brazil's main sources of trade income at risk at a time the South American country's economy is slowing. Brazil, the world's top soybean exporter, sends the vast majority of soy shipments to China.

Raul Padilla, who will take charge of Bunge's Brazilian operations next week, said China had not canceled any Brazilian soybean purchases from the company.

Bunge Brazil is not seeing any losses from the problem with China, said Padilla, who replaces Pedro Parente.

Bunge plans to ship its first soy cargo from Barcarena on Saturday, launching a short cut that will make Brazilian soy more competitive by relieving the overcrowded ports in the southeast.

Some 10 companies are expected to start exporting from the Barcarena region in the coming years. Parente said shipping soy by road and river barge north from Mato Grosso in central Brazil through the Amazon to Para state's coast would help Bunge gain market share in Brazil.

U.S.-based Bunge is already the top agricultural exporter in Brazil, the world's top sugar and coffee producer. With the Barcarena terminal, Bunge will have capacity to export 35 million tonnes of grains from Brazil per year.

Selling Cane MIlls
Bunge's outgoing Brazil CEO Parente, who until recently was also chairman of the board of Unica, Brazil's main sugar and ethanol lobby, said Bunge is in the process of selling its cane milling assets because they have failed to produce returns.

"The (cane) division has its own cash flow but it has not produced returns on its capital," said Parente, who was given the task at Unica of being the sugar and ethanol industry's lead negotiator with the government.

Most of Brazil's cane industry has been operating in the red over the past several quarters due to the weak price of sugar and government controls on fuel prices. Mills have been unable to generate sufficient margins to cover operating and financing costs.

Bunge operates eight mills in Brazil and is one of the country's leading producers of sugar and ethanol, crushing 20 million tonnes of cane a year.

"We have an obligation (to shareholders) to cover the cost of capital," he said.

Bunge first announced plans to seek buyers for its mills in November, only half a decade after making major investments into the sugar and ethanol sector. Bunge estimated the value of its milling assets at $2 billion to $2.5 billion in February.