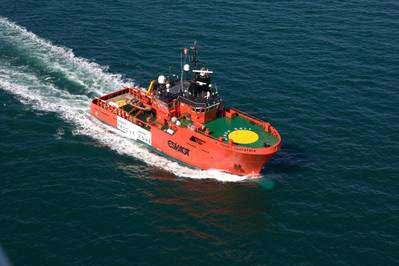 Danish offshore vessel owner Esvagt is looking to recruit around 50 seafarers on the back of recently awarded contracts with energy giant TotalEnergies.

"New long-term contracts with TotalEnergies on seven vessels for operations in the North Sea have resulted in great activity in the HR-department in ESVAGT," the company said.

The company said in August it had secured several contracts with TotalEnergies as part of the marine spread for the Danish part of the North Sea.

According to ESVAGT, the contracts are creating a demand for about 50 new seafarers, which is around an 8 percent expansion of the workforce.

"It is a positive matter, that we are on market for this substantial number of new colleagues”, says Nick Vejlgaard Ørskov, Chief Human Resources Officer in ESVAGT.

“We have been thoroughly preparing while getting the contracts closed to ensure our readiness when the contracts were ready. A recruitment process with impressive results in Denmark and the Faroe Islands have already been carried out. Despite a great demand for skilled seafarers, we recognize that ESVAGT is an attractive workplace”, he says.

The recruitment is at all levels of seafarers from ordinary ship’s assistants to senior officers, the company said.

The contracts with TotalEnergies, formerly known as Total, include the overall safety emergency response plus transport and transfer of goods and personnel and is based on a rethinking of the operational structure. The fleet will be made up of several multi-functional vessels, and the agreements will focus on reducing the overall energy usage and lowering emissions.

The underlying contracts include ESVAGT Dana, a combined “walk to work” (W2W) and Emergency Response and Rescue Vessel (ERRV); two rebuild PX121 multi-functional vessels that will combine transport and ERRV; plus two ESVAGT “group 2” ERRV vessels. All have been committed on long-term contracts. Additionally, TotalEnergies has extended the current contracts for three ESVAGT “group 3” ERRV vessels for different time scopes to, among other things, contribute to the Tyra redevelopment project.