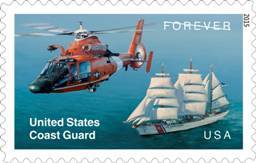 The stamp is being issued as a Forever stamp and honors the Coast Guard for its role in protecting the security of the nation and advancing its vital maritime interests. Aug. 4, 2015, marks 225 years of the U.S. Coast Guard’s lifesaving legacy.