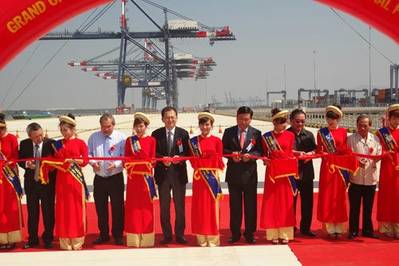 The construction of the port, an international gateway, was funded with 12.9 trillion VND (US$ 620-billion) from the Japan International Cooperation Agency (JICA) and is expected to ease the strain on other ports in Ho Chi Minh City and also to improve trade links among south-eastern provinces.

Deputy Prime Minister Hoang Trung Hai and representatives of the Japanese embassy and the Japan International Cooperation Agency (JICA), along with leaders from Vietnam’s ministries and sectors, attended the event.

Addressing the ceremony, Hai appreciated the assistance of the Japanese Government and the project’s investors, noting that the project falls on the 40th anniversary of Vietnam-Japan diplomatic ties, demonstrating the time-honoured cooperation between the two countries.

The new port will also open direct shipping links with other domestic and international ports worldwide, cutting the intermediate and transit shipping costs. The container port includes two berths with a total length of 600m, which can accommodate 130,000-DWT vessels, and other facilities which will provide navigational capacity of 700,000 TEUs per year. The general cargo port has two berths which can serve 50,000-tonne vessels.

The U.S. Army Corps of Engineers has released the Final Environmental Impact Statement for the North Wing of the BP Cherry Point Marine Terminal…