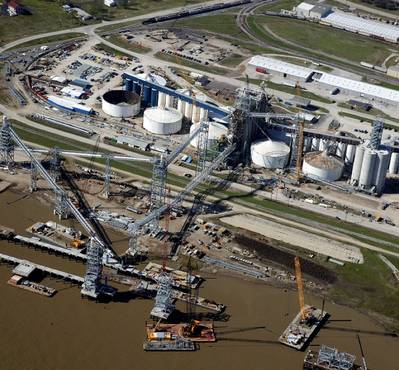 The Baton Rouge Terminal will be located on approximately 90 acres of land near the Port of Greater Baton Rouge (the Port) and will be connected to the Port’s existing deepwater docks on the Mississippi River. The docks are capable of berthing vessels ranging from barges to Aframax class vessels. Genesis Energy will initially construct approximately 1.1 million barrels of tankage for the storage of crude oil, intermediates and/or refined products with the capability to expand to provide additional terminaling services to its customers.

Following its completion, which remains on schedule for 2Q 2014, Scenic Station will provide shippers a low cost destination rail facility dually-connected to both the Canadian National Railway and the Kansas City Southern Railway which has superb interconnectivity with the Canadian Pacific Railway.

Genesis Energy expects the Baton Rouge Terminal to be operational by the end of 2Q 2015. They say they have entered into definitive agreements with ExxonMobil in which it has secured committed rights for a portion of the capacity at and through Genesis Energy’s proposed facilities.

The project is expected to generate economic benefits both for the Greater Baton Rouge community and the state of Louisiana and further expands Genesis Energy’s operations and commitment to providing efficient midstream supply and logistics services in the region.

“We are excited to announce our new Baton Rouge Terminal which combines our Scenic Station unit train facility, the deepwater access of the Port, a large and flexible storage footprint and both import / export capability to create an important new integrated terminal for crude oil as well as intermediate and finished refined products,” said Genesis Energy Chief Executive Officer Grant Sims.

CMA CGM, one of the world's largest container shipping groups, on Friday posted a jump in first-quarter earnings and said it expected strong demand fo