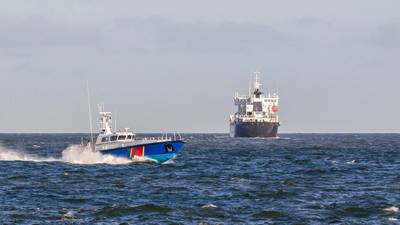 It is widely expected that cuts in defense and security budgets are coming as governments across the world grapple with the fiscal fallout from the COVID-19 crisis. To ensure that these cuts do not undermine global security, policymakers should approach their defense budgets with a scalpel, not a sledgehammer.

In navigating the tough choices that lay ahead, government decision-makers should pursue spending reforms that enable states to operate both leaner and smarter, without sacrificing their vital security interests.

The maritime security domain offers an exemplary case study. It is not uncommon for a country’s ministry of defense, department of fisheries, maritime administration and port authority to all have different platforms to monitor the maritime domain for threats. And all of them may be procuring technology that, for lack of commercial awareness, is not even fit for purpose. A more rational approach is paramount—not least because the stakes are so high.

With the vast majority of world trade moving by sea, the maritime industry is one of the few economic pillars that has not stopped operating throughout the pandemic; indeed, commercial shipping has kept supply chains moving and kept other industries functioning, even taking on additional trade volume that has historically moved by air.

The maritime space is facing unprecedented hardship and vulnerability on multiple fronts. The marine environment is threatened by a mix of aggressive overfishing, dumping and the constant risk of oil spills made all the more acute by the storage of oil on the water amid the gross fluctuations in the hydrocarbons market. Maritime infrastructure includes not only the ports that serve as the gateways for global trade, but the 420 privately owned submarine cables that carry 97% of global telephone and internet data—arguably the most critical international infrastructure during the pandemic.

And the shipping industry, despite being the lifeblood of the economy, is facing incidental vessel defaults that strand ships at sea, and an industry-wide crisis wherein 400,000 seafarers—the men and women who make the economy move—have been stuck at sea since before the pandemic began. At the same time, new fuel regulations, and changing geopolitical circumstances are creating new navigational, operational and practical challenges.

Do not reinvent the wheel: COTS and GOTS
Defending and securing the global maritime domain necessarily involves protecting commercial shipping and privately owned infrastructure including oil rigs, ports and submarine cables. The sheer volume of activity, assets and actors that need protection greatly outstretch the traditional naval capacity of all the world’s navies combined. Furthermore, criminals, terrorists and nefarious state actors are able to innovate at an increasingly rapid pace, often using consumer off the shelf (COTS) technology to advance interests that undermine maritime security and threaten national interests. Drones, unmanned underwater systems and a wide array of COTS technology make attacking the vulnerable maritime domain all the easier. Even a pair of bolt cutters from a hardware store and a rented scuba suit would be enough to cut a submarine cable and cause an acute national crisis in some places.

Exploring COTS offerings and encouraging government off the shelf (GOTS) technologies to be designed with maximum customizable flexibility may allow states to maintain the agility needed to confront threats while staying within increasingly tight budget constraints. Maritime technology—from advanced maritime intelligence platforms to long-range supply drones—provides a fantastic example of how to leverage commercial innovation to meet defense and security needs. The way that commercial shipping companies monitor their fleets, identify threats and address security concerns may provide governments with the insights on how to protect them.

Solutions never come in a box
While it is vital to consider defense and security reform to incorporate new technology in new ways, it is equally important to remember that “solutions” never come in a box. When confronting a human-made defense or security threat, technology alone will never “solve” it. Technology is a tool that must be integrated into the defense and security institutions of the state to be used effectively within the laws and other frameworks applicable in the state.

Furthermore, the obsession with big data has led to “data-driven” approaches to problem solving. Data alone, however, does not answer questions or paint a picture; they need to be interpreted. Massive data sets can be greatly filtered and analyzed using artificial intelligence (AI) to home in on information that a human might not be able to see given the sheer volume of data points. Combining that information or insight from AI with human expertise, however, can then lead to a true solution. Technology cannot replace people; it can, however, change the human capital needed to be effective and what skill sets are most necessary to produce the desired defense and security results. Identifying useful GOTS technology, therefore, is only part of the process; integrating it into the defense and security apparatus is the other crucial task at hand.

Establish a department of innovation
As states simultaneously confront decreased budgets and increased threats to the marine environment, maritime infrastructure and commercial shipping, they will struggle to leverage COTS, facilitate GOTS and maximize effect for minimal cost. Similar challenges exist in other domains, and they come in two broad categories: public-private and intra-governmental. In the first instance, governments are not accustomed to knowing and understanding the commercial marketplace. This is partly why countless governments have spent national treasure on development projects that produce technology that could not compete with even basic commercial offerings. At the same time, different agencies may all be approaching their problem-solving in different manners, resulting in a mix of technologies all designed to accomplish the same purposes.

Somewhat ironically, it helps to look at how developing states with extensive needs and limited resources have confronted both the public-private and intra-governmental divides. Sierra Leone provides a fantastic example, having developed a Directorate of Science, Technology and Innovation to help maximize the efficiency and effectiveness of all government agencies. Serving as both the connective tissue between government departments and the interface between the government and industry, the Directorate has sought to reduce waste by investing the country’s limited budget in innovative technology that has maximum impact. At a time of global economic contraction, such an approach—establishing a cross-cutting department of innovation—should be emulated by governments around the world.

Fight complexity with creativity
As global maritime vulnerability increases, governments are uniquely placed to employ creative means to securing the maritime domain and defending maritime borders. Take for example, the growing crisis of abandoned seafarers, left on their ships at sea without owners and agents to arrange their return to land. To understand the significance of this threat, consider the massive explosion that devastated Beirut on August 4, 2020; it was the cargo from a vessel abandoned in 2013 that blew up. Rather than allow this threat to the seafarers, the environment and to life on land to fester, governments could easily leverage existing technology to create a system for crews to send a signal that they have been abandoned. Using satellite-based Automated Information Systems (AIS)—already required on all vessels engaged in international maritime commerce—a real-time map of any abandoned vessels could help focus commercial attention on how to buy the distressed assets and neutralize the threat. Such an approach would be, therefore, a two-way bridging of the public-private divide: governments using commercial technology to identify a threat, and then leveraging commercial interests to resolve it.

Criminals, terrorists and nefarious state actors have proven themselves incredibly creative in the maritime domain. The budget cuts may actually help catalyze more creative thinking on the part of governments, as well. In 2002 during the infamous Millennium Challenge War Game, U.S. Marine Corps Lt. Gen. Paul Van Riper ingeniously sank the entire U.S. fleet by using motorcycle messengers to help coordinate an asymmetric attack. A generation later, as governments confront the hard realities emanating from the pandemic, they will have to decide whether creativity and innovation will be their enemy or their advantage.

Conclusion
States can begin to establish new directorates of innovation that can work within budget constraints to discern and procure the spectrum of tools that will make governments not only more efficient but more effective in defense and security. The maritime domain may help spark ideas, but the concept is equally applicable across the range of defense and security domains. Ultimately, integration of innovation will be a process of evolution—the governments that demonstrate the greatest agility and creativity will find themselves surviving while those who resist the process of reimagination will suffer.