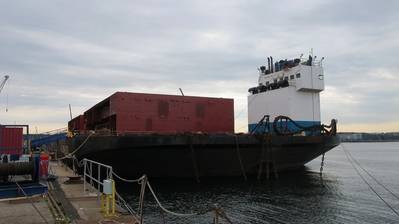 CB04 will be lifted onto HMS Prince of Wales in four sections. (Photo: Aircraft Carrier Alliance)

The final sections of the second Queen Elizabeth Class aircraft carrier produced by Cammell Laird arrived at Babcock Rosyth Facilities in Fife on Thursday, September 3, following their voyage from Birkenhead.
Center Block 4 is the longest of the upper sections of hull of HMS Prince of Wales, the second of two new aircraft carriers being constructed by the Aircraft Carrier Alliance. Comprised in two parts (rings C and D), it contains a mixture of aviation workshops, mission system compartments and training rooms. The top deck of the block will make up the single biggest part of the flight deck, situated behind the aft island.
HMS Prince of Wales Delivery Director, Angus Holt, said, “We’re delighted to receive this largest section of HMS Prince of Wales’ flight deck. Her arrival in Rosyth marks an important phase of the project as Cammell Laird completes its two-year construction phase.
The block will be fitted onto the top of Lower Block 4 in four sections by Goliath, the largest lift capacity crane in the U.K. The 1,600-metric-ton sections of the carrier was transported by a seagoing barge and travelled around the north coast to reach the assembly site, a journey of 680 miles over five days.
“It’s always an impressive sight when these massive blocks sail under the Forth Bridges on their way to Rosyth,” Holt continued. “We now have just two more blocks under construction elsewhere in the U.K. at our Glasgow shipyard – so this really is a turning point where we move from the construction phase into final assembly."
The aircraft carriers HMS Queen Elizabeth and HMS Prince of Wales are being delivered by the Aircraft Carrier Alliance, a partnering relationship between BAE Systems, Thales UK, Babcock and the Ministry of Defense.
The Queen Elizabeth Class will be the centerpiece of Britain’s defense capability for the 21st century. Each 65,000-metric-ton aircraft carrier will provide the armed forces with a four-acre military operating base, which can travel up to 500 miles per day to be deployed anywhere around the world. Operating the Joint Strike Fighter Lightning II jets and a number of types of helicopter, the QE Class will be versatile enough to be used across the full spectrum of military activity from warfighting to providing humanitarian aid and disaster relief.