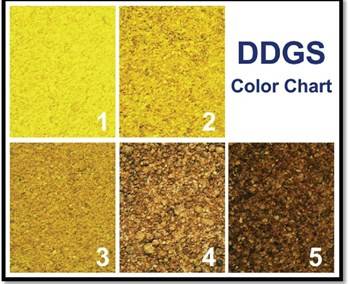 Example of a DDGS color chart from the ‘Guide to Distiller’s Dried Grains with Solubles (DDGS)’ issued by the United States Grains Council. (Source: http://www.nepia.com/our-services/loss-prevention/signals-online/cargo/ddgs-to-china/ddgs-to-china-be-aware-and-be-prepared/)