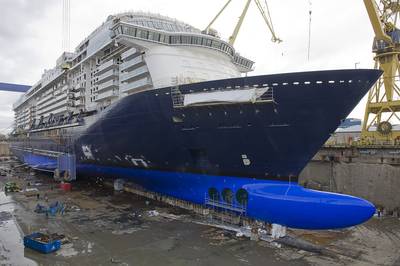 On Thursday 22 May 2014, STX Finland Oy’s Turku Shipyard handed over the first newbuild to TUI Cruises. Mein Schiff 3 is a sophisticated and highly innovative cruise ship, designed for the German premium-class cruise market.

With the production started in November 2012, the environmentally friendly Mein Schiff 3 was floated out in November 2013. The ship provided some 5,500 man-years of labour to the shipyard and the network. Mein Schiff 3 will start operating on 13 June 2014, with the maiden voyage starting from Hamburg and heading for Palma de Mallorca. Her sister ship, Mein Schiff 4, will be launched in September 2014 and delivered to TUI Cruises in spring 2015.

Innovative and efficient ship building concepts, with a high block outfitting ratio and modularisation, have been successfully utilised more than ever in the building process of this approx. 294 metres long and 36 metres wide ship. Maximum use of state-of-the-art technology supports environmentally-friendly operation of the ship. With a gross tonnage of 99,500, Mein Schiff 3 consumes around 30 per cent less energy compared to cruise ships of similar sizes. In the construction of Mein Schiff 3, STX Finland and TUI Cruises are also taking a giant leap by integrating the most innovative emission-reducing technology. The result sets new standards with a combined exhaust gas treatment system specifically aimed at reducing emissions. Mein Schiff 3 pushes the limits of what is currently technically viable. A desulphurisation plant will reduce toxic sulphur emissions by up to 99 per cent, while particulate emissions will decrease by 60 per cent.

The glass facade at the stern of the ship, approximately 167 m2 in size and in the shape of a diamond, is the design highlight of the third well-being ship. The diamond extends over two decks on the outside and imparts an unmistakable character to the new TUI Cruises ship. Yet Mein Schiff 3 offers a great deal more than that. Nestling in the light-flooded inner section of the diamond is the Große Freiheit (Great Freedom). Here, guests are welcomed by a unique world of pleasure with speciality restaurants, such as the fine dining Richards - Feines Essen and the Steakhouse Surf & Turf, as well as a modern coffee house and an exclusive bar. Apart from that, the ship offers an additional wide variety of different types of restaurants, bars and lounges, as well as a night club.

Additional amenities include various areas for sports and relaxation, including a large Spa & Sports area, the first 25-metre pool to be found on a cruise ship (Deck 12), and an outdoor arena supplied with a large LED screen, providing plenty of space for sporting activities and outdoor cinema events (Deck 14). Entertainment facilities include a theatre extending over three decks, equipped with the very latest light, sound and image technology, and the Klanghaus (sound house), the first concert hall at sea.

The ship has 1,253 passenger cabins of which some 90 percent are outside cabins and 82 per cent balcony cabins. By providing more than 80 per cent of the cabins with a balcony, the ship offers its guests the opportunity to enjoy many hours in private on their own balconies. Furthermore, the wide variety of cabin categories− for families and SPA-lovers among others − enables to cater for the individual needs and well-being of the guests on board. One highlight are the ten Himmel- und Meer Suiten (sky- and sea suites) which cover two levels and have a 29 m2 roof terrace of their own. The cabins are produced by STX Finland Cabins Oy.