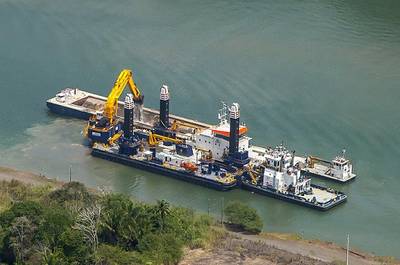 IHC Special Dredging Equipment, part of IHC Merwede, specializes in the design and construction of special vessels, such as backhoe dredgers – has completed the contract with ACP for the design, construction and delivery of this innovative backhoe dredger. The company was awarded this project due to the reliable technology at its disposal and an excellent track record following the notable delivery of a previous order for ACP – the cutter suction dredger Quibían 1.

The Alberto Alemán Zubieta was designed and built using the latest technological developments, IHC said. The vessel will initially be deployed for the expansion and then the maintenance of the Panama Canal. She has been conceived and developed to operate in the Canal’s Gaillard Cut, where she will dredge blasted rock and heavy soil.