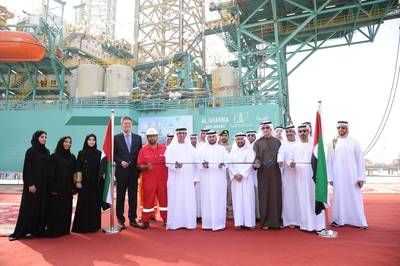 Lamprell (ticker: LAM), a provider of diversified engineering and contracting services to the energy industry, announced the completion of construction on the jackup drilling rig, Al Gharbia, and its delivery to Abu Dhabi’s National Drilling Company (NDC).
Completion and delivery of the jackup rig, on time and on budget, was marked at an inauguration ceremony held at Lamprell’s Hamriyah facility in the UAE on 22 December. The rig will depart the facility in late December en route to its drilling location in Abu Dhabi.
The contract for the NDC “Al Gharbia” rig was signed in November 2014 and this is the seventh rig in a series of nine rigs being built and delivered by Lamprell to NDC.  All nine rigs have been designed according to the Cameron LeTourneau Super 116E (Enhanced) Class design. The remaining two rigs are proceeding on schedule and will be delivered as planned in 2017.