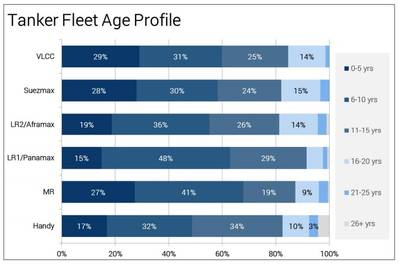 The Gibson tanker report  reflects on the subject of tanker demolition which is always topical, particularly now after several years of robust investment in new tonnage.

With exception of Handy/MRs, the orderbook in percentage terms relative to the existing fleet is quite substantial, starting from 17% for LR1/Panamaxes up to 24% for Suezmaxes at the top.
The pace of deliveries will accelerate this year, and even more additions to the market are expected in 2017, to highs not seen since 2009/11.
In contrast, the immediate prospects for scrapping are restricted, taking into account the young age profile. Around 85% of the global fleet above 25,000 dwt is less than 15 years of age, while another 11% is between in the 16 to 20 year bracket.
This indicates a limited number of natural candidates for scrap yards. At present, the drivers for demolition are further reduced as tanker earnings remain healthy whilst scrap prices are at their weakest since 2008.
In addition, with bunkers close to their lowest level in over a decade, the pressure in terms of fuel efficiency on aging units has almost disappeared.
However, pending legislation, in particular regarding Ballast Water Treatment could potentially push a few extra aging ladies towards earlier retirement beyond 2016. The upcoming flood of tanker deliveries could also apply a considerable downwards pressure on earnings, if future increases in demand fail to keep pace with expanding supply.
In this scenario, lower earnings would offer a stronger stimulus for demolition, with older tonnage likely to be affected the most.
For example, in the Suezmax sector, the trade for units over 15 years of age is largely restricted to the East, most notably Middle East to India/Pakistan/Bangladesh region. Although younger tankers also operate in the region, the spot market is dominated by vintage tonnage, which is often traded at a notable discount.
Our analysis indicates that last year the difference in terms of tce earnings at times reached 45-50% for Middle East – WC India runs. Despite much lower levels, returns remained healthy, owing to the exceptional strength of the market in 2015.
Yet, the picture is somewhat different this year, as rates and earnings started to soften, even for modern tonnage in the West. If the market moves to even lower levels, it will become harder for older tonnage to remain above the break even, particularly if modern units start competing more aggressively in the East.
The prospects for tanker demolition are more robust towards the end of this decade. Around 25% of the current tanker fleet is between 11 and 15 years of age, pointing to a notable increase in aging tonnage in about five years from now.
In addition, oil prices sooner or later are likely to resume their upward path and with it, fuel efficiency could once again become a critical “make-or-break” factor. The emphasis on eco designs will become notably more pronounced, if the IMO global sulphur cap at 0.5% is adopted in 2020, fast-tracking the exit of the most inefficient ships.