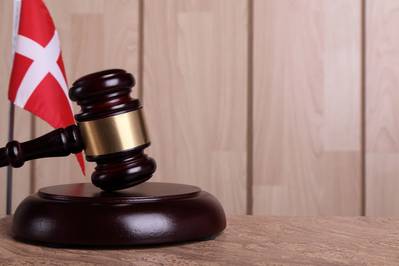 A Danish court on Monday found a Nigerian man guilty of endangering the lives of Danish military personnel in a shooting incident last November involving Denmark's navy and a crew of suspected Nigerian pirates in the Gulf of Guinea.

However, the court declined to sentence the Nigerian, Lucky Frances, 40, despite a call from the prosecutor for a prison sentence of 12 to 15 months.

As part of international anti-piracy efforts, Denmark deployed a frigate to the Gulf of Guinea in October last year. The following month, it intervened in an alleged attack on a commercial vessel, killing four pirates and capturing four other suspects.

"The court emphasized that the (40-year-old) man, together with the other perpetrators, fulfilled all the signs of piracy and had to be described as a pirate group," Copenhagen city court said in a statement.

Frances, who was injured during a fire fight with Danish navy personnel in the November clash, was taken to Denmark for prosecution in January after being treated at a hospital in Ghana. Danish authorities deemed it unsafe to release him in Ghana. His leg was amputated as a result of his injuries.

Frances was exempted from any legal consequences due to his medical condition and the fact that charges against the other three suspected pirates had been dropped, his lawyer Jesper Storm Thygesen told Reuters.

Charges against the three other suspected Nigerian pirates were dropped in January, after Denmark failed to find a country in the region to take them. They were released from detention on the frigate and put to sea in a small dinghy in the Gulf of Guinea.

Frances will remain in custody until both sides have decided whether to appeal against the verdict, Thygesen said.