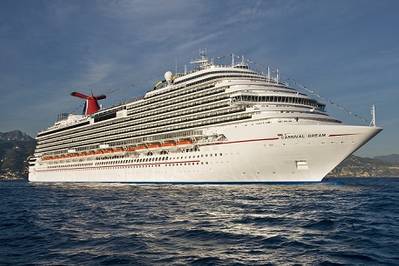 With Carnival Dream, Carnival Cruise Lines to Carry More Than 400,000 Passengers Annually from Port of New Orleans – Most of Any Cruise Operator

The 1,004-foot-long Carnival Dream offers a host of on-board innovations, including a 303-footlong water slide -- among the longest at sea – as well as a luxurious 23,750-square-foot Cloud 9 Spa, more than two dozen bars, restaurants and lounges, a half-mile outdoor promenade encircling the ship, and 1,823 staterooms and suites. Guests are served by 1,367 crew members.

The Port of New Orleans has invested $2.3 million in upgrades to its Erato Street Cruise Terminal to accommodate a ship as large as the 130,000-ton Carnival Dream.

A study by Cruise Lines International Association found that spending by Carnival and other cruise operators in Louisiana topped $399 million in 2012, generating 7,548 jobs and $294 million in personal income. CLIA also ranked New Orleans the sixth largest cruise port in the U.S.