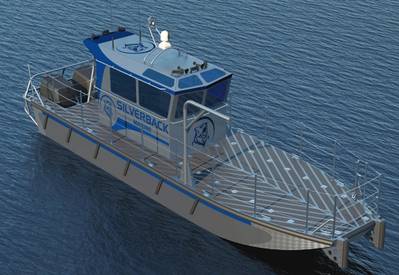 Diamond Sea Glaze said it has been chosen by Tacoma, Wash. shipbuilder Silverback Marine to provide windows and a wheelhouse door for its first-ever crew transfer vessel (CTV) for ship-to-shore (STS) operations. The order includes its D series windows, along with the model 250 weathertight door.

“We chose Diamond Sea Glaze for two reasons: proven history of durability in tough conditions, and accurate engineering of DSG’s systems,” said Ian Gracey, CEO of Silverback Marine. “Glazing and enclosures are a key component to passenger safety and operator visibility, and only the best will do in commercial applications like this.”

The vessel will be used to transport personnel between shore and other vessels in the Pacific Northwest.

Diamond Sea Glaze said the contract is its first for an STS CTV in offshore wind, and noted Freeman Marine—another member of AdvanTec Marine family—also recently won a key CTV contract for offshore wind operations, including a large number of class-approved, cast-aluminum hatches. “We are gratified to have Ian’s vote of confidence on his first STS CTD,” said Scott R. Atkinson, Business Development Manager at AdvanTec Marine. “Offshore Wind is now emerging as a key market for AdvanTec Marine.”

Silverback’s new STS CTV is 35’ 5” long and 10’ wide. It will be powered by twin 300-horsepower OXE Diesel outboards. Among other innovations, the flat deck sheds all water overboard, thus eliminating the need for auto bailers.

Silverback began building the vessel in July 2022. Final assembly is scheduled to be completed in January 2023, followed closely by sea trials.