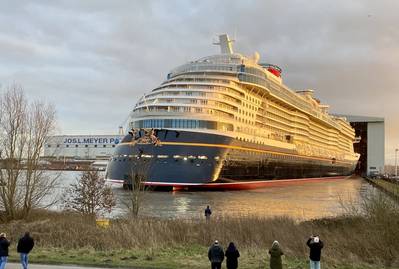 Disney's first new cruise ship in a decade was floated out on Friday at German shipyard Meyer Werft.

The 144,000 GT newbuild has 1,250 cabins, with room to accommodate at least 2,500 guests, and is the first in a series of three Triton Class cruise ships Meyer Werft is building for U.S.-based Disney Cruise Line. The series' second ship is expected to enter service in 2024, followed by the third in 2025.

The German shipyard previously built Disney's Dream Class vessels, Disney Dream and Disney Fantasy, delivered in 2010 and 2012 respectively. At the time, the 129,690 GT cruise ships were the largest ever built in Germany.