Aid Ship Docks in Yemen after Diversion to Saudi Arabia 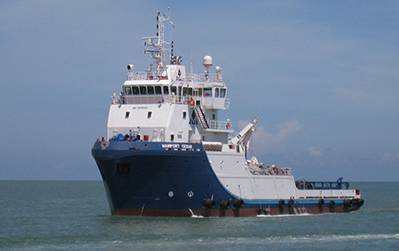 A World Food Programme (WFP) ship carrying humanitarian aid offloaded its cargo in Yemen on Wednesday, the United Nations said, after it was diverted to Saudi Arabia last month because it was carrying communications equipment.

Saudi Arabia is leading an Arab military coalition in a war against Iran-allied Houthi rebels and army forces loyal to former president Ali Abdullah Saleh in an effort to restore President Abd-Rabbu Mansour Hadi to power.

The Mainport Cedar, which the United Nations said was carrying a cargo of humanitarian relief supplies bound for the Houthi-controlled port of Hodeida, was diverted by the coalition to the Saudi port of Jizan on Feb. 11.

"The vessel was carrying interagency cargo that includes canned tuna and medical supplies. It had also been carrying information technology equipment that was left behind in Jizan to complete paperwork to allow it into Aden for the U.N. humanitarian hub," Haq said.

Brigadier General Ahmed Asseri, the Saudi-led coalition's spokesman, said in February that the communications equipment was similar to that used by the Houthis and had not been declared by the WFP.

Yemen relies almost solely on imports, but the conflict has slowed shipments to a trickle after Saudi Arabia imposed a naval blockade to stop weapons being imported.

United Nations aid chief Stephen O'Brien told the U.N. Security Council earlier this month that a U.N. verification and inspection mechanism for shipments had now been launched in a bid to boost commercial imports. O'Brien is due to address the council again on Yemen on Thursday.

More than 6,000 people have been killed, about half of them civilians, in Yemen since Saudi-led forces began military operations in March last year after the Houthis advanced on Hadi's temporary headquarters in the southern port city of Aden.