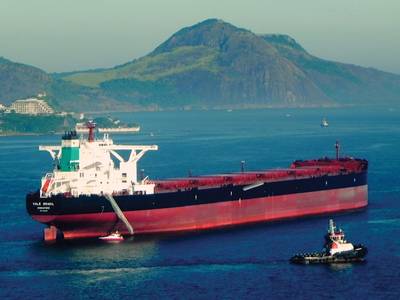 Rates for capesize bulk carriers on key Asian routes could continue to fall next week in the absence of major charterers although lower freight rates could tempt top iron ore miners back into the market and potentially buoy rates, brokers said.

Charterers, including Vale, BHP Billiton and Fortescue Metals, kept out of the market on Thursday, shipbrokers said.

"Without the likes of Vale and Rio Tinto in the market, rates are not going to rise. There are still plenty of ships available for October loading," said a Singapore-based capesize broker.

There have been just two capesize fixtures from Brazil to China since last Thursday, both contracted by operators rather than miners, Reuters shipping data showed.

"Fixing activity is limited to the operators rather than the miners. Unless we see a significant increase in activity on this long duration business, it is difficult to be optimistic about a quarter four rebound," said Norwegian broker Fearnley in its weekly market report on Wednesday.

Time charter rates for a voyage from Australia to China are around $9,000 per day, close to ship operating costs of about $7,000 per day, the broker said.

"I would have thought there would have been a bit of resistance at these rates from owners," the broker said.

But charterers can afford to stay out of the market until at least early next week on expectation rates would fall further, the broker added.

"They can then snap up cheap ships."

Rates for the Western Australia-China route fell to $7.70 per tonne on Wednesday, down from $8.07 per tonne a week earlier.

Freight rates for the Brazil-China route fell to $17.86 per tonne on Wednesday against $19.35 per tonne last week.

The smaller panamax market has remained strong even though Chinese charterers have been absent due to the week-long National Day holiday, ship brokers said.

"The market is to stay steady on most routes," said a Singapore-based panamax broker.

"I hope next week the Chinese return to soak up the surplus of tonnage and the market should push up then."

Rates for a panamax transpacific voyage climbed to $7,442 per day on Wednesday, from $7,045 per day last week.

Rates for smaller supramax bulk carriers trended down this week due to less activity in both the Pacific and Atlantic oceans.

Freight rates fell to around $9,500 per day on Wednesday against $10,000 per day last week for a Pacific roundtrip voyage, brokers said.

The Baltic Exchange's main sea freight index closed at 991 on Wednesday against 1,055 last week. Technical analysis showed the benchmark may fall to 935 in a week because it has broken a support at 1,066.