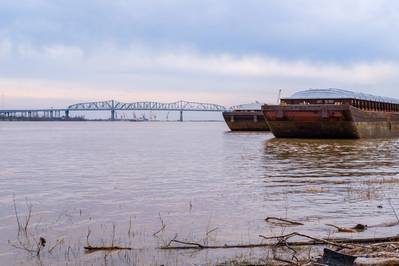 Low water levels on the Mississippi River are likely to persist this winter as drier-than-normal weather is expected across the southern United States and Gulf Coast, U.S. government forecasters said on Thursday.

Drought, which currently spans 59% of the country, is expected to continue or worsen in the middle and lower Mississippi River valley as well as in much of the West and the Great Plains, the National Oceanic and Atmospheric Administration's (NOAA) Climate Prediction Center said in its winter (December-February) outlook.

Above-average precipitation, however, expected in the Midwest and the Ohio River valley may provide some relief to the drought-parched waterway later in the winter, NOAA said, citing the effects of a third consecutive winter of La Nina, a climate phenomenon that alters weather patterns.

Water levels on the Mississippi River dropped to historic lows this autumn, at times halting barge shipments of grain, fertilizer, coal and other commodities on the major shipping waterway and revealing a century-old shipwreck.

Some 60% of U.S. grain exports exit the country via the Gulf Coast. Crucial shipments of fertilizer, farm chemicals and road salt that move up the Mississippi River ahead of the winter have also been disrupted.

"Across the lower Mississippi Valley, we are favoring continuation of below-normal precipitation," said Jon Gottschalck, chief of the Operational Prediction Branch of NOAA's Climate Prediction Center.

"That would certainly, if the prediction is realized, lead to continued low water levels and exacerbate drought conditions there."

NOAA forecasters are also predicting drought conditions would persist or worsen in the West and in the southern Plains farm belt, where farmers are struggling to plant their winter wheat crop due to excessively dry soils.

Nearly 90% of Kansas, the top U.S. wheat producing state, is under some level of drought, the worst in at least eight years, according to National Drought Mitigation Center data.

Mokena, Ill. based Middle River Marine, LLC announced it has struck a deal to acquire the assets of Chicago's Kindra Lake…