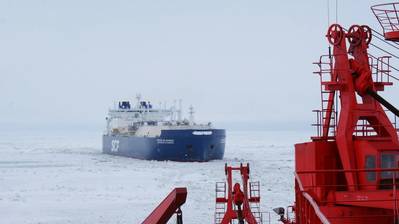 The new ships will be the second generation of vessels engineered to transport LNG from the Russian Arctic, with special emphasis on year-round operation in the eastern sector of the Northern Sea Route.

DSME worked with Novatek and Finnish engineering firm Aker Arctic to develop the state-of-the-art icebreaking LNG carriers, which will transport LNG year-round primarily from the Utrenny LNG terminal at Novatek’s new Arctic LNG 2 project to Asian markets via the Northern Sea Route. Located in the Gydan Peninsula and across the Gulf of Ob from the fully operational Yamal LNG, Arctic LNG 2 will have a total production capacity of 19.8 million tons per year.

The design of the new Arc7 LNG carriers feature a completely new icebreaking hull form and increased propulsion power compared to their predecessors. Each will feature a propulsion system comprising three Azipod units with a total capacity of 51 megawatts, which is expected to provide new vessels with increased speed and maneuverability when sailing in ice conditions, compared with icebreaking LNG carriers of the previous generation. Before the construction begins, this improved operational capability in ice-covered waters will be verified with ice model tests in Aker Arctic’s ice laboratory in Helsinki, Finland.

Sovcomflot, or SCF Group, operator of the world's first Arc7 LNG carrier Christophe de Margerie in service since 2017, has said that the three 172,410-cubic-meter-capacity LNG carriers it ordered this month from DSME are scheduled to be delivered in 2023 and will operate on 30-year time charter agreements. All three vessels will fly the Russian flag and have Russian crews.

Igor Tonkovidov, Sovcomflot President & CEO, said, “Strengthening SCF’s position in LNG shipping segment is amongst the priorities of our current long-term development strategy, which is aimed at growing highly visible long-term, cyclically resistant and higher-margin infrastructure cash flows. The total contract backlog relating to these new time charter agreements, over the 30-year charter period, is estimated at $4.2 billion. This will increase SCF’s total contract backlog to approximately $24 billion. I want to use this opportunity to thank our partners at Novatek, as well as its subsidiaries operating the Yamal LNG and the Arctic LNG 2 projects, for their support in implementing LNG projects in the Russian Arctic, which are of significant importance for the Russian economy, and I am looking forward to the next stage of our close collaboration.”

Sovcomflot currently has 15 gas carriers in operation and a further 19 under construction.

Previously, in 2019 and 2020, another 15 icebreaking LNG carriers for the Arctic LNG 2 project were ordered from Zvezda Shipbuilding Complex (Russia). SCF Group will own the lead vessel of this series, with the remaining 14 being owned by SMART LNG, a joint venture between SCF Group and Novatek. These 15 vessels are scheduled for delivery from 2023 through 2025 and are time chartered to the project’s operator.