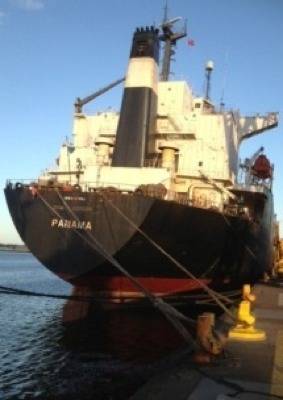 The 'Donald Duckling' was detained by the UK's Maritime & Coastguard Agency (MCA) this week after an inspection revealed a long list of safety concerns, and will not be allowed to leave the Port of Tyne until mechanical and safety issues are resolved, reports the 'Shields Gazette'.

Maritime inspectors cited by the 'Shields Gazette' considered that standards on board the Donald Duckling were some of the worst they had ever encountered.

Crew members on the Panamanian-registered bulk carrier were so poorly fed they were forced to fish from the vessel and burn loose wood on deck to cook their food, because galley equipment didn’t work.

According to the local newspaper, the Donald Duckling had already been detained for 121 days earlier this year in Gibraltar, after 21 safety deficiencies were discovered by port state control officers. Then in September, another inspection in Las Palmas, Spain, uncovered 33 more safety issues.

Owned by TMT Shipping of Taiwan, the ship arrived at Port of Tyne to load a cargo of scrap metal bound for Korea.