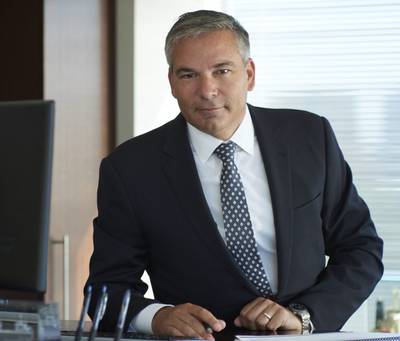 Gary Vogel, chief executive officer of Eagle Bulk Shipping Inc., has been named as the Connecticut Maritime Association (CMA) Commodore for the year 2022.

The 2022 Commodore Award, given each year to a person in the international maritime industry who has contributed to the growth and development of the industry, will be presented on March 31, at the Gala Dinner marking the conclusion of the annual Connecticut Maritime Association conference and expo, in Stamford, Conn..

Vogel has served as CEO and director of Eagle Bulk Shipping Inc. (NASDAQ: EGLE) since September, 2015. Prior to Eagle, Vogel spent a total of 14 years with Clipper Group, Ltd, in positions of increasing responsibility, culminating in the role of CEO and director.

Vogel graduated from the U.S. Merchant Marine Academy in 1988 with a Bachelor of Science degree in marine transportation and received his U.S. Coast Guard Unlimited Tonnage 3rd Officers License. After graduating from the academy, Vogel served as an officer in the U.S. Naval Reserve and began his shore-side career as a dry cargo broker at Pinney, Inc. and Skaarup Shipbrokers, and then in chartering for Van Ommeren Bulk Shipping (USA).

Chris Aversano, president of the Connecticut Maritime Association, said, “On behalf of the CMA Board, we are very pleased to be presenting Gary Vogel, CEO and director of Eagle Bulk, with the 2022 Commodore Award. Since graduating from the U.S. Merchant Marine Academy, Gary has spent over 30 years in dry bulk, developing a stellar reputation for his ability to successfully lead organizations, turnaround businesses, and navigate the volatile shipping markets.

“As a Connecticut local, Gary has been a strong advocate for the CMA and its important mission to build and sustain a vibrant shipping community for our region at large.” he shared.

Vogel said, “Having started my career in Connecticut, the CMA has been a constant, and has always been a source of fellowship and information exchange with professionals across the industry. As a former employee of both Torben Jensen and Ole Skaarup, I am extremely honored and humbled to be chosen as this year's honoree and join them, as well as many other former recipients, who I hold in the highest regard.

“Ultimately, I believe this honor is the result of the collective efforts by the team at Eagle Bulk, who over the past six years has worked tirelessly with the common goal of creating one of the leading integrated dry bulk shipowner-operators,” he added.