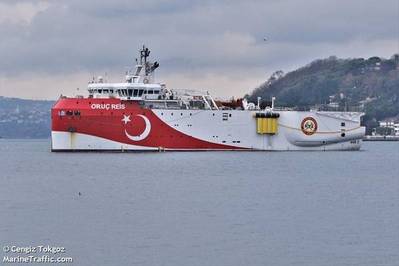 Turkey will not bow to threats in its dispute with Greece and Cyprus over maritime claims in the eastern Mediterranean, President Tayyip Erdogan said on Monday as European Union foreign ministers met in Brussels to discuss the issue.

But Erdogan also said Turkey wanted negotiations over the conflicting claims to continental shelves and rights to potential energy resources.

The EU ministers were due to evaluate grounds for sanctions against Turkey. The bloc's leaders will then decide on Thursday whether to make good on their threat, after Turkey sent an exploration vessel into waters claimed by Greece.

"In the eastern Mediterranean issue, our country never sides with tension, but with peace, cooperation, fairness and implementing justice. The path to this goes through negotiations based on mutual respect," Erdogan said, repeating a call for a conference that involves all actors in the region.

However, Turkey would not allow a "pirate mentality" shown by other countries to restrict it to a narrow strip of coastal water. "We will not bow down to threats and blackmail... We will not allow imperialist expansionism," he said.

Tensions flared in August when Ankara sent a survey vessel to map out energy drilling prospects in waters also claimed by Greece. Ankara and Athens agreed to resume talks over their contested maritime claims in September, ending a 4-year hiatus.

But Greece has since said it would not begin talks as long as Turkish vessels were in contested waters. The vessel, Oruc Reis, returned to port again last week.

The EU's Parliament has called for sanctions against Turkey over Erdogan's visit to the breakaway Turkish Cypriot state of Northern Cyprus - which is recognized only by Ankara - and over the Turkish operations in the eastern Mediterranean, which it called illegal.

France is leading the push in the EU to sanction Turkey at the summit on Dec. 10-11. Diplomats say any measures would likely target areas of Turkey's economy linked to hydrocarbon exploration. (Reporting by Ali Kucukgocmen; Editing by Dominic Evans and Gareth Jones)