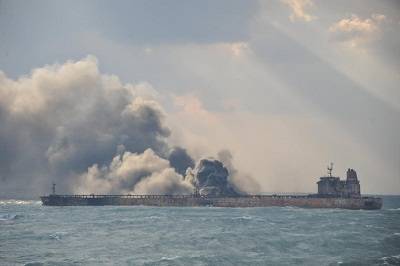 A stricken Iranian oil tanker continued exploding on Friday, hampering rescue efforts, Chinese state media reported, as Japan's Coast Guard said the ship drifted away from the Chinese coast and into Japan's exclusive economic zone (EEZ).
The ship, which has been ablaze for almost a week since it collided with another vessel on Saturday night in the East China Sea, was about 286 km (178 miles) northwest of Sokkozaki on the island of Amami Oshima as of 0700 GMT on Friday, the Japan Coast Guard said in a statement.
The vessel is drifting to the southwest at a speed of 2.2 km (1.4 miles) per hour, the Coast Guard said.
Amami Oshima is one of the northern islands in the Ryukyu islands chain that includes Okinawa.
There have been continuous explosions onboard the ship, China's official Xinhua news agency said late on Friday, citing the Ministry of Transport.
The tanker Sanchi (IMO:9356608), owned by Iran's top oil shipping operator National Iranian Tanker Co, was carrying almost 1 million barrels of condensate, an ultra-light, highly flammable crude oil, to South Korea.
It collided with the freighter CF Crystal (IMO:9497050) that was carrying grain from the United States about 160 nautical miles (184 km) off China's coast near Shanghai.
The Coast Guard has sent patrol boats and aircraft to monitor the situation, said a spokesman for the Japan Coast Guard's 10th region based in Kagoshima.
Fourteen ships are carrying out emergency response work, including one from Japan and two from South Korea, the transport ministry said in a statement released late on Friday.
The Sanchi had a crew of 32 sailors at the time of the collision. The body of a mariner suspected to be from the ship was recovered on Monday and sent to Shanghai for identification. The rest of the crew, which included 30 Iranians and two Bangladeshis, remains missing.
Twelve Iranian rescue workers had been brought to Shanghai to help and would join rescue work soon, Lu Kang, a spokesman from China's foreign ministry, told a regular briefing.
(Reporting by Yuka Obayashi; Additional reporting by Muyu Xu and Christian Shepherd; Writing by Josephine Mason; Editing by Christian Schmollinger)