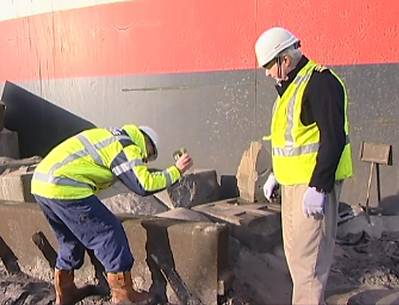 Whatever the cause of the recent loss of the Vinalines Queen and crew, the message for the industry is a stark one – greater enforcement of the regulations laid down in the IMSBC (International Maritime Solid Bulk Cargo) code is essential, together with effective training for shipowners and crews to deal with what can be the catastrophic effects of an unsafe cargo. The tragedy has again raised issues relating to badly managed dangerous cargoes, particularly when compared with the loss of three similar vessels through cargo liquefaction just over a year ago.

“There seems to have been an industry view amongst many that liquefaction of cargo is a rare occurrence, but the facts are now speaking for themselves, ”explains Nigel Cleave, CEO of Videotel Marine International. “It is only through training and education that we can get the message home that such tragedies can be prevented – not only through avoidance of the risk itself, but through following the proper procedures should a problem occur during the voyage.” Nigel Cleave adds, “The conclusion drawn every time must be that nothing should be loaded and transported unless everyone involved is 100% sure that it is safe to do so. We can provide the training and support to help them be sure.”

Videotel’s very latest 2012 training programme, Dangerous and Difficult Bulk Cargoes – Minerals and Man-Made Derivatives, sets out clearly how to deal with potentially dangerous mineral based cargoes as specified in the IMSBC code.  In particular, the programme looks at how ship’s personnel can greatly reduce the chances of loading an unsafe cargo by verifying shipper’s documentation and figures given for temperature and/or moisture content.  It also impresses on all crew involved the necessity of regular monitoring of the cargo condition within the hold while under passage, which is essential to controlling atmospheres or maintaining stability. The course is aimed at all shipowners and onboard crew who regularly transport dangerous cargoes and is available as a DVD with supporting booklet and an interactive CD-ROM.