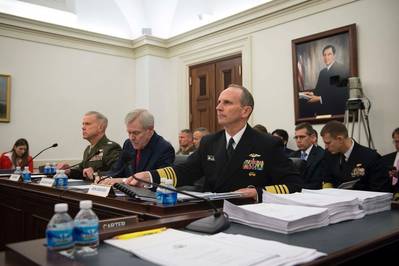 "As we conclude over a decade of wars and bring our ground forces home from extended stability operations, your naval forces will remain on watch," Greenert said.  The Navy's efforts are focused in the Asia-Pacific region and the Arabian Gulf, he said, but the service continues to provide presence and response as needed in other theaters. "Now, with this forward presence, over the last year, we were able to influence and shape decisions of leaders in the Arabian Gulf, in Northeast Asia and the Levant," the admiral said.

To protect American interests and encourage regional leaders to make the right choices, the Navy patrolled off the shores of Libya, Egypt and Sudan, he continued. And, he said, naval forces relieved suffering and provided assistance and recovery in the Philippines in the wake of Typhoon Haiyan.

The Navy's forward presence dissuades aggression against the nation's allies in the East and the South China Seas, the admiral noted, and helps to deter piracy in the Horn of Africa.

The 2014 budget will enable the Navy to maintain an "acceptable" forward presence, Greenert said. There are sufficient funds to restore fleet training, maintenance and operations and recover a substantial part of the 2013 backlog, he noted.  Recognizing that budgetary constraints will continue through fiscal year 2015, the admiral said he set six priorities: sea-based strategic deterrence; forward presence; the capability and capacity to win decisively; readiness; asymmetric capabilities and maintaining technological edge; and sustaining a relevant industrial base.

"Using these priorities, we built a balanced portfolio of capabilities within the fiscal guidance provided," Admiral Greenert told the committee.

If defense funding reverted to the caps imposed in the 2010 Budget Control Act, he said, the Navy would be unable to execute at least four of the 10 primary missions articulated in the 2012 Defense Strategic Guidance and the 2014 Quadrennial Defense Review.

Greenert noted that the Navy is on board with the effort to get the nation's fiscal house in order, but any budgetary solutions need to sustain readiness while building an affordable and relevant future force.