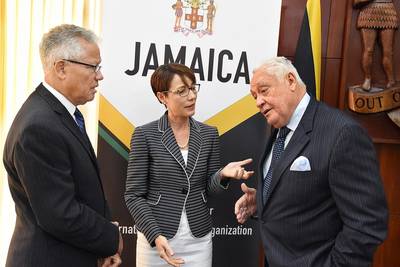 Jamaica launched its bid to be elected to Category ‘C’ of the International Maritime Organization (IMO) Council last Thursday (2 February) - in a move to position Jamaica as a ‘viable maritime hub’.

Addressing specially invited guests, Jamaica’s Minister of Transport and Mining The Honourable L. Michael Henry CD MP said: “I am very pleased to be associated with yet another event which is designed to showcase Jamaica in a positive light. We consider our bid to be elected to Category ‘C’ of the IMO as a strategic move in order to raise our maritime profile in this governing body.

“Jamaica when viewed through the lens of the international maritime community and especially by virtue of our signatory status of the UN Convention on the Law of the Sea – we are responsible for discharging three types of jurisdiction under the maritime treaties to which we are a party.

Mr Henry also announced that Jamaica hosts the Caribbean Memorandum of Understanding (CMOU) on Port State Control – a forum which involves collaboration among CARICOM and other States in the Caribbean carrying out inspections to prevent sub-standard ships in the region.

Welcoming the launch, Senator The Honourable Kamina Johnson Smith, Minister of Foreign Affairs and Foreign Trade said: “As an Island nation we depend on the maritime industry to support jobs and to import foods and goods. As a country, we are on the cusp of rolling out concrete plans to be the fourth node in the global logistics chain with the full support of the Government.  This move is about positioning Jamaica as a viable maritime hub; this will have the potential to attract more shipping and allied services, as we continue to grow and trade.”

Prime Minister of Jamaica The Most Honourable Andrew Holness, in a video message at the beginning of the event, also welcomed the move telling the audience the decision to launch the candidature comes against the background of the importance of the maritime sector to the Jamaican economy.

He said: “Jamaica is heavily dependent on the sector for much of our supply of consumer goods, energy, rolling stock, including vital transportation requirements, raw materials for our factories, and for the export of our products to overseas markets.
“Additionally, the country boasts a remarkable maritime infrastructure built around the  Maritime Authority of Jamaica.  We are the location of the Caribbean Maritime Institute (CMI) which is on the cusp of becoming the only Maritime University in the Caribbean region.  The country has one of the top ranked container transhipment facilities in the region handling general cargo, break bulk and container, bauxite/alumina and gypsum.”