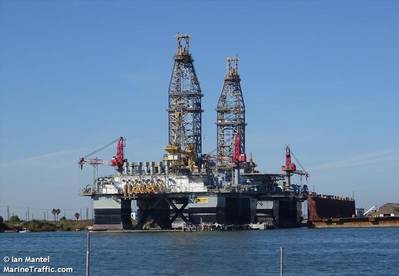 Two offshore drilling rigs, previously used for oil and gas exploration beneath the seabed, could soon help with space exploration.

SpaceX, or Space Exploration Technologies Corp, was founded by Musk back in 2002 to cut space transportation costs and enable the colonization of Mars.

The two rigs in question are the Valaris 8500 and Valaris 8501, and Lone Star reportedly paid a total of $7 million, so $3.5 million apiece.

In early 2020, citing the challenging backdrop for the offshore drilling sector, caused by another oil industry downturn and the global pandemic, Valaris moved to lower costs by stacking several of its competitive rigs and deciding to retire seven other rigs, including the 8500 and the 8501 semi-submersibles. In August 2020, Valaris filed for bankruptcy.

Back to the Space X story, CNBC dug up a 2020 tweet by Elon Musk, tweeted around the time when the rigs were (to be) acquired, indicating the two drilling units' new purpose would be to serve as rocket launchpads - or spaceports as Musk said.

He at the time, said: "SpaceX is building a floating, superheavy-class spaceports for Mars, moon & hypersonic travel around Earth."

Musk's tweet was a reply to a tweet by Gavin - SpaceXFleet.com, who had reported that SpaceX was hiring offshore operations engineers in Brownsville, Texas.

Per CNBC, SpaceX will convert the two rigs to serve as launchpads for Space X Starship rockets.

So, what's a SpaceX Starship? Below is a description by SpaceX:

"SpaceX’s Starship spacecraft and Super Heavy rocket (collectively referred to as Starship) represent a fully reusable transportation system designed to carry both crew and cargo to Earth orbit, the Moon, Mars, and beyond. Starship will be the world’s most powerful launch vehicle ever developed, with the ability to carry in excess of 100 metric tonnes to Earth orbit.

Also worth noting, with the new owners, the two drilling rigs (spaceports?) now have new names: Deimos and Phobos, named after the two moons of Mars.

Offshore Engineer has reached out to SpaceX, seeking more info on the report, and on the rig conversion process, as well as on the expected timeline for the rigs to become operational. We'll update the article with any response we may receive.

Aerospace and launch photographer Jack Beyer tweeted a few photos of one of the rigs sporting the new name on the helideck: