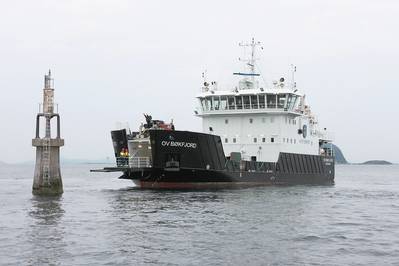 By combining existing technologies in a new way, it is possible to build ferries that represent a quantum leap for the environment. That is the idea behind a new R&D project involving four major players in the maritime sector: Rolls-Royce, Color Line, Norled and the Norwegian Coastal Administration. The project has now received a NOK 5.9 million grant from the Research Council of Norway’s ENERGIX program.

The ‘Zero Emission Ferry’ project is intended to result in a new electrical system that not only provides more efficient power output and stable operations, but is cheaper to run, easier to integrate – and has a lower environmental impact. That is no mean feat aboard a ship, which typically has a hybrid system that is a thousand times larger than a hybrid passenger car.
The four partners aim to achieve this by investigating new ways of combining systems for energy storage, energy management, onboard energy distribution and recharging. The work is already well underway, and the two ferry operators have specific goals with regard to the outcome.
“Our aim is to gradually reduce the emissions produced by our fleet of car and high-speed passenger ferries, and become the first Norwegian operator with 100 percent zero emissions. We are well underway with electrification on our short ferry routes, but are waiting for technology to become mature enough to be able to cover longer stretches. We are therefore delighted to be able to contribute our experience to this project,” said Lars Jacob Engelsen, Deputy CEO at Norled.
“This project is completely in line with our environmental strategy, in which the electrification of the fleet plays a key role. We want to exploit the energy on board more efficiently, reduce the operating time for our onboard machine park and ensure that we cover a larger proportion of our energy consumption from ‘green’ onshore power rather than fossil fuels,” said Johann Martinussen, Color Line’s Superintendent Automation & Control.
The Norwegian Coastal Administration Shipping Company was one of the first Norwegian ship owners to use batteries on board. Their multifunctional vessel OV Bøkfjord is equipped with an environment-friendly hybrid system, a new vessel with an even larger battery pack is under construction, and the organization has an option for a third such vessel.
“We are proud to be part of this program, and look forward to collaborating with the other partners. Only a few companies worldwide currently have much experience of shipboard electrification, but the four of us in this consortium are among the most experienced. The Norwegian Coastal Administration has an ambitious environmental strategy. Our newly constructed ships, our future ships and our participation in R&D programs like this one are key contributions in this environmental strategy,” said Trond Røren, CEO of the Norwegian Coastal Administration Shipping Company.
The Marine division of Rolls-Royce is the consortium’s technology partner, and will provide both financial and manpower. The objective is to develop a system that is commercially attractive for ship owners and as environment-friendly as possible.
“The aim is for the entire system or its component parts to be capable of use on both short-haul car ferries and big cruise ferries. Norway is far out in front with regard to green shipping, and we see an international export potential for these kinds of systems,” said Sigurd Øvrebø, General Manager Product Electric and Power at Rolls-Royce - Marine.
The partners behind the ‘Zero Emission Ship’ project represent three different maritime operating environments, and their combined experience forms the basis of the technology that will be developed. The ENERGIX program demands practical results in return for its support, and the objective is to follow-up this two-year research program with three full-scale installations.