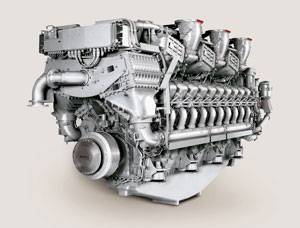 Tognum subsidiary MTU Friedrichshafen GmbH will upgrade its Series 1163 marine engines for the IMO 2 and IMO 3 emissions regulations. “The 1163 family will be carrying on its success story and the future version will be even cleaner and more fuel-efficient than the present engine generation,” said Rainer Breidenbach, Tognum Executive Board member with responsibility for the Business Unit Engines.

All of the major engine features which are crucial for customers, such as power-to-weight ratio and acceleration characteristics, compact physical dimensions and engine interface with the vessel, will remain unchanged. That means that additional options such as resilient mounts or an acoustic enclosure can continue to be used in the future. The 2-stage turbocharging technology will also be retained, but with its efficiency optimized even further. New features in this series are the common rail injection system (1,800bar injection pressure), the ADEC electronic engine management system which has already proven itself on Series 2000 and 4000 engines, and a new combustion process. Compliance with the IMO 2 emissions regulations due to come into force from 2011, will even be achieved using only in engine technology and without exhaust aftertreatment. The new engines will also meet the latest requirements of the classification societies covering, for example, low noise emissions, high shock resistance and shielding against electromagnetic influences.

IMO 3 emissions regulations, which will be introduced in 2016, will most probably be met by using an SCR system to reduce nitrogen oxide emissions. This ensures that in future, the engines will be able to continue to operate in Emission Control Areas (ECAs).

The three cylinder configurations (12V, 16V and 20V) in the 1163 engine family cover a performance range from 4,440 to 7,400kW at 1,300 rpm. With a 230mm bore and 280mm stroke, the series gets its name from its per cylinder capacity of 11.63 liters. Series 1163 engines are in service in both civilian and defense applications ranging from catamaran ferries to coast guard vessels.