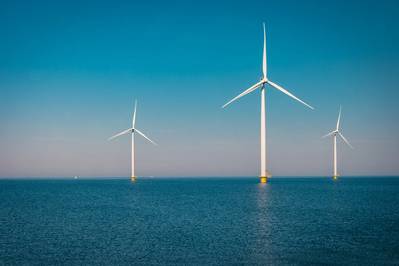 Offshore wind (OSW) energy is a new focus for the U.S. under President Biden, who highlighted it in his January 27, 2021 Executive Order on climate. Since then, there have been several new supporting developments:

The time for OSW development has arrived, and with it the opportunity to grow the U.S. maritime infrastructure needed to haul, install and maintain a critically needed renewable energy resource.

OSW presents new challenges and opportunities across the nation, and a recent appropriations bill  affirms U.S. jurisdiction on the Outer Continental Shelf (OCS) subsoil and seabed  to include regulation of non-mineral energy resources. OCS development of oil and gas resources was formalized in 1953 with the Outer Continental Shelf Lands Act  (OCSLA). The OCSLA included “minerals” (that included oil and gas) while the appropriations bill added “non-mineral” resources to the regulatory scheme now managed by the Department of the Interior. Today, the Interior’s Bureau of Ocean Energy Management has the responsibilities for leasing and use of the continental shelf beyond the three-mile state jurisdictional limits. But this is not the only regulatory scheme to affect OSW development.

The Department of Homeland Security houses the CBP that has certain responsibilities for implementation of the Jones Act. Shipping from one U.S. port to another is regulated by the Jones Act (46 USC §50101, et seq.), requiring that the vessels traveling between American ports be flagged as American. This type of Jones Act regulation is generally referred to as “coastwise” laws. The amendment in the appropriation bill affects coastwise laws by expanding the laws to renewable energy and other non-mineral resources on the OCS and the CBP regulatory authority to transport and delivery of goods and materials from a U.S. port to all coastwise points on the OCS seabed. Two recent CBP rulings clarify at which point in the establishment of a leased OCS site for ASW development the coastwise laws apply. The rulings are HQ H309186, dated January 27, 2021, and HQ H317289, dated March 25, 2021, which clarified the January 27 ruling. In concert with HQ 116111, issued on January 30, 2004, and HQ H316313, issued on February 4, 2021, these rulings allow construction activities used to build offshore wind generators to be more confidently evaluated in the planning process to ensure compliance with the coastwise laws.

In general, these rulings explain when the Jones Act requirement for U.S. flag vessels to be used is triggered in detailed scenarios. Any delivery to a pristine OCS site by a foreign flag vessel or U.S. flag vessel is not transportation between coastwise points and therefore the requirement does not apply. Once any material (rocks for scour protection, wind turbine generator supports, etc.) is deposited on the OCS, that location is a coastwise point and the Jones Act applies. A vessel, whether foreign flagged or not, that attaches to the seabed and becomes stationary is no longer moving merchandise and can install components of OSW facilities without triggering the Jones Act. The February 4 ruling explained “the movement of the crane as contemplated by the facts does not constitute transportation”.

OSW challenges include complex regulatory programs at the federal, state and local levels and affect both onshore and offshore activities. The Biden administration’s new focus on OSW development is an opportunity to provide regulatory and policy guidance on integration and cooperation between these levels of government. Implementation of climate goals to combat sea level rise and decarbonize the U.S. energy grid depend on it. A first step is for stakeholders in OSW to participate in the process that President Biden announced in his Executive Order on climate: “In conducting this review, the Secretary of the Interior shall consult, as appropriate, with the heads of relevant agencies, including the Secretary of Defense, the Secretary of Agriculture, the Secretary of Commerce, through the Administrator of the National Oceanic and Atmospheric Administration, the Secretary of Energy, the Chair of the Council on Environmental Quality, State and Tribal authorities, project developers, and other interested parties.”

The U.S. maritime industry must take this opportunity and participate as a significant stakeholder in the new laws, regulations and decisions being made now that enable OSW in America.