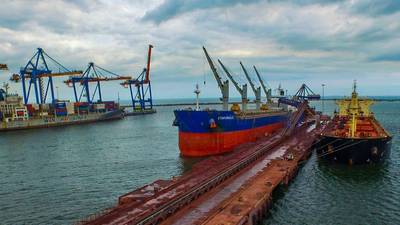 Essar Ports, India's second-largest, private-sector port and terminal company by capacity and throughput, posted a record 20 per cent cargo growth in April-September period of the ongoing financial year (ending March 31, 2020) with a throughput of 27.29 MT.

The Essar Group company, h operates four terminals on the east and west coasts of India, said in a press note that the growth has been driven by a 183.21% increase in third-party cargo compared to that in the corresponding period in the previous financial year. Cargo from captive customers grew by 6%.

Rajiv Agarwal, MD & CEO, Essar Ports Ltd, said: “Significant boost in third-party business has been the key driver for our growth in overall volumes. Alongside this, our focus on driving operational efficiencies and minimizing operating costs has helped in recording strong growth. Essar Ports has consistently surpassed the average growth rate of the sector, which is showing signs of heightened economic activity.”

The 50 MTPA terminal Hazira has had the cargo handling of 14.17 MT with 3.24% growth compared to the same period last year 46% growth in third-party business over the numbers in H1FY19 (same period previous fiscal).

The 20 MTPA Essar Bulk Terminal Salaya (EBTSL), deepest draft facility of Saurashtra region, has clocked a cargo throughput of 3.22 MT in the first half of FY20.

The 16 MTPA Essar Bulk Terminal Paradip (EBTPL), in Paradip Port, has clocked a cargo throughput of 4 MT in the first half of FY20.

"All Essar Ports terminals are equipped with advanced cargo handling infrastructure and are well poised to double capacity in the near to medium term," claimed the press release.

Outside India, Essar’s port assets include a liquid terminal in the UK and a coal berth in the development stage at Mozambique’s Beira port.