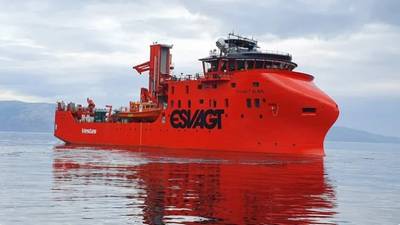 The Esvagt Alba service operations vessel, delivered last week by Havyard, will be the base for the operation and maintenance of the Moray East offshore wind farm off the coast of Scotland.

The offshore wind farm is being developed by Moray Offshore Windfarm East Ltd (MOWEL), which is a joint venture company owned by Ocean Winds ( 56.6%) Diamond Green Limited (33.4%), and CTG (10%).

The 950MW wind farm is expected to be operational by 2022.  When completed in 2022, the Moray East Offshore Wind will supply up to 40 percent of Scottish electricity needs.

As for the Esvagt Alba vessel, it is the second of three purpose-built Service Operations Vessels (SOV) that Esvagt has built for Vestas.

It is the sister vessel to the previous newbuilt in Esvagt’s fleet, the SOV ’Esvagt Schelde’ now in service for Vestas in the Borssele 3-4 and Northwester 2 windfarms in Dutch and Belgian waters respectively, both working from their base port in Oostende.

Buyers Reportedly Line-up for a Crack at Seadrill