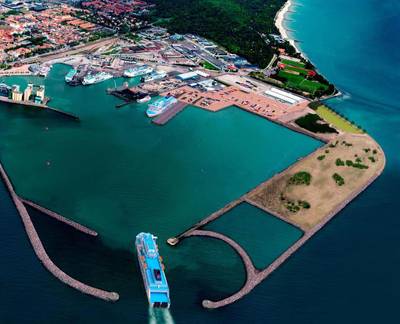 Artist's impression of the new port (© Port of Ystad)

The European Investment Bank (EIB) has signed a SEK 445 million ($45.6 million) loan agreement with the Municipality of Ystad to expand harbor facilities so that new, larger liquefied natural gas (LNG) vessels on the Swinoujscie-Ystad line can access the harbor.

The port in the southern-Swedish town is a busy connection point to the Polish Port of Swinoujscie and the Danish island of Bornholm. The project aims at increasing the capacity and upgrading the Port of Ystad facilities in order to accommodate larger ro-pax vessels over 240 meters in length, which will start operating next year.

Works include the construction of two new, deeper, ferry berths at a new pier located in the outer port basin, with associated facilities in reclaimed areas located to the east of the new berths. It also consists of dredging works in the existing outer basin of the port, the construction of a new breakwater south of the existing eastern breakwater, with a new reclaimed platform for future port activities expansion and the extension of the breakwater at the western part of the port.

The project is expected to improve the climate performance of the port. Measures undertaken in this sense include the improvement of on-shore power supply for berthed vessels, and a reduction of emissions by maneuvering vessels due to easier berthing.

Ystad is a key connection point for tourism and transport in Sweden.” said EIB Vice President Thomas Östros. “As the climate bank of the EU, the EIB wants to provide finance to projects that seek to reduce the environmental impact of their operations, while keeping business going and stimulating sustainable growth and job creation. This project is spot on in all of those senses.”

”With this investment, Port of Ystad will soon be well prepared to further consolidate its position as the third largest ferry passenger port in Sweden.” added Björn Boström, CEO of Port of Ystad. “Now, in an even more environmentally friendly way.”