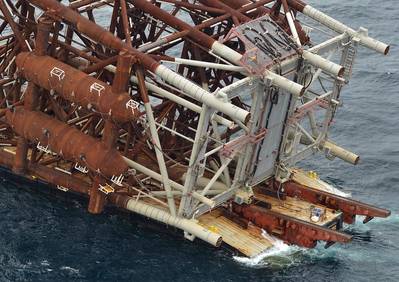 The European Union on Monday said it would toughen its rules on ship recycling and decommissioning offshore oil and gas sites, and set new targets to restore damaged marine ecosystems.

Sectors linked to seas and oceans, such as shipping, fishing and offshore electricity generation, employ more than 4 million people in the EU. They are also facing a clutch of challenges, from climate change's disruption of fish habitats, to the tourism sector's loss of income during COVID-19 lockdowns.

"The pandemic has hit the marine economy sectors in different, but profound ways. We have an opportunity to start afresh," EU Environment Commissioner Virginius Sinkevicius said in a statement.

As it seeks to eliminate net EU greenhouse gas emissions by 2050 and hit new pollution targets, the Commission on Monday said it will revise the bloc's standards for ship recycling, potentially expanding them beyond the current rules requiring environmentally sound recycling of ships bigger than 500 gross tonnage.

EU rules for decommissioning offshore oil and gas platforms will also be revised, the Commission said, to protect the marine environment when such infrastructure is wound down.

The Commission said it would propose legally binding targets to restore damaged EU ecosystems, targeting fish spawning areas or sites that could be used to store carbon dioxide sucked out of the air.

It urged EU countries to use cash from the bloc's 750-billion-euro COVID-19 recovery fund to invest in sustainable maritime and coastal industries.

Brussels has already proposed a target for the 27-country EU to legally protect 30% of its land and sea by 2030. That would safeguard 19% more sea than today, and can include curbing or banning commercial activities in an area, or ensuring unspoiled natural areas remain intact.

The Commission is also preparing proposals, due in July, to expand its carbon market to maritime transport, as well as revising EU taxation rules - a move that could make polluting fuels costlier.

Any such changes would need to be signed off by the bloc's member countries to take effect.