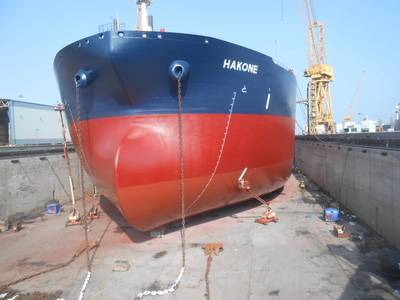 Belgian tanker operator Euronav expects to complete preparations on its fleet in coming weeks ahead of tougher rules next year limiting sulphur emissions from ocean-going vessels, a company executive said on Tuesday.

Ship owners must cut emissions by reducing the sulphur content in fuel to 0.5% from 3.5% under the rules, which are set by the United Nations' International Maritime Organization (IMO), and come into effect in January.

To comply, ship owners can use low-sulphur fuel, opt for other, more expensive clean fuels such as liquefied natural gas, or install exhaust gas cleaning systems known as scrubbers.

Euronav, one of the world's biggest tanker players, has a fleet over 70 ships including 42 supertankers, which can each carry 2 million barrels of oil. The company has so far opted for low sulphur fuel.

Ships switching to low sulphur fuel need ensure fuel tanks and related piping are cleaned of sludge and sediment that build up with high sulphur fuel, which could also contaminate the new cleaner fuel and potentially make the vessel non-compliant.

In order to do this, vessels need to cleaned ahead of IMO 2020, which involves days worth of preparations for each ship.

Brian Gallagher, Euronav's head of investor relations, said it had already completed the cleaning for some of its vessels.

"We are looking to do this in a fairly quick scale over a period between now and Christmas with the least disruption as possible," he told Reuters. "We are prepared."

Euronav also owns the only two operational megatankers, which can each carry up to 3 million barrels of oil.

As part of its strategy for IMO 2020, Euronav has purchased the equivalent of 420,000 tonnes of compliant fuel and marine gasoil, which it is storing onboard one of those vessels, the Oceania, off Singapore.

Gallagher said Oceania had already started supplying ships with the new compliant fuel, adding it would take up to six months for the vessel to fully discharge.

Crude tanker freight earnings soared to a record $300,000 a day earlier this month as ship availability tightened, prompting operators to ensure their vessels were operational to ride the rally. Rates have since dropped to just under $70,000 a day.