European Group Lifts Funding to $4.6B to Prevent Plastic Pollution in Seas 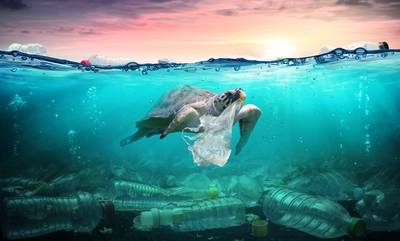 A group of European development banks plan to double its funding for global efforts to stop plastic waste from polluting the world's oceans to 4 billion euros ($4.6 billion).

The Clean Oceans Initiative, led by the French and German development banks and the European Investment Bank is the largest such grouping targeting plastic pollution of the sea.

Around 8 million tonnes of plastic waste enters the oceans every year, most of it discarded on land or washed into rivers, the group said on Friday, threatening the marine environment and communities that rely on the sea for their livelihood.

The new target for 2025 builds on an initial funding goal of 2 billion euros by 2023, 80% of which has already been allocated to projects in countries including Sri Lanka, China, Egypt that will benefit more than 20 million people, the group said.

Earlier this week a review of more than 2,590 studies commissioned by the environmental group WWF said that by the end of the century, marine areas more than two and a half times the size of Greenland could exceed ecologically dangerous thresholds of microplastic concentration.

This is based on projections that plastic production is expected to more than double by 2040 resulting in plastic debris in the ocean quadrupling by 2050, the WWF report said.

The 1.6 billion euros already allocated by the group of European developments to tackle the issue took the form of long-term financing for projects that limit the discharge of plastics, micro-plastics and other litter through better management of waste, wastewater and storm water.

Improving management in developing countries, home to some of the fastest-growing and most densely populated cities, would help stop some of the 1.5 million tonnes of micro-plastics that end up in the sea every year, it said.