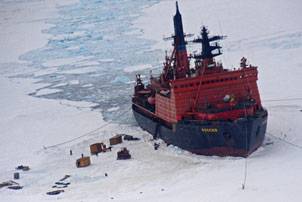 A Coast Guard Air Station Kodiak HC-130 Hercules aircrew contacts the Russian crew of the 500-ft nuclear-powered icebreaker Thursday during a third overflight by the Coast Guard as the vessel's crew evacuates the Russian research Station North Pole 37 from the ice of the Arctic Ocean about 550 miles northeast of Barrow, Alaska.

The team of 15 scientists originally intended to remain at the station until September but determined in May the ice had become unsafe. The Rossiya left its base at Murmansk, Russia, 10 days ago to carry out the evacuation, which the scientists reported is progressing well.